Why is M1 Chip on Apple so critical? | Inquirer Technology
Close
menu
search

Why is M1 Chip on Apple so critical?

The M1 chip is in the Apple news as the up-to-date in-house processor. After years of development, the company released the first computers with their ARM-based M1 chip in November 2020. These include the M1 MacBook Air, M1 Mac Pro, and M1 Mac mini. The company also launched a macOS Big Sur update with M1 optimizations in April 2021. 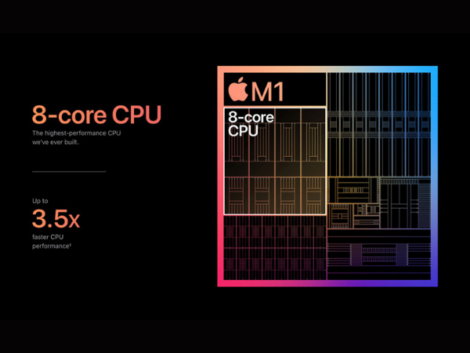 Before the launch, Apple had been using multiple Intel chips for Macs since 2006. While Intel chips are built on x86 architecture, the M1 chip is built on an ARM-based architecture similar to the A-series chips that Apple uses for their newer iPhones and iPads.

The M1 chip integrates different components, such as CPU, GPU, and unified memory architecture (RAM), to enable different features in the new Mac computers. As a result, the M1 chip is faster and more efficient than the old Intel chips.

Although the company’s high-end Intel computers are still capable of superior GPU performance, buyers are looking into the newer models as the tech company transitions the rest of their lineup into updated Apple Silicon chips.

Why is the M1 Chip so important? 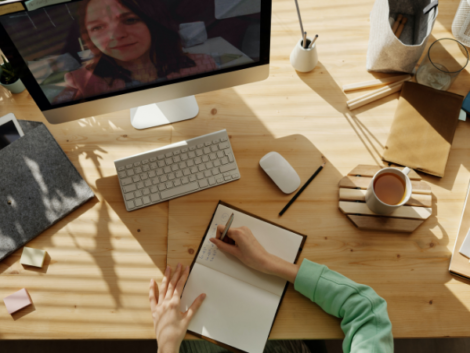 The M1 chip is an important development because it changes the way computers handle essential computations. Most PCs in the market come with several computing components to handle different processing tasks, regardless of whether they run Windows or macOS.

These components include the CPU, which handles computations used for basic tasks like running apps and browsing the internet. The GPU, which processes graphics computations and outputting signals to your screen or monitor.

In contrast, other components, such as storage, memory, and cache, occupy different areas on the motherboard. 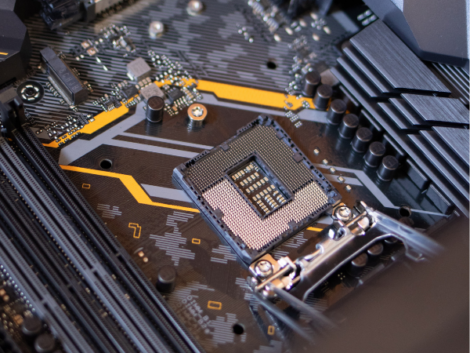 The M1 chip is a single system on a chip (SoC) instead of collecting separate processing parts. Its unified memory architecture enables multiple processor components to access the same data pool without copying data from one another. This allows for greater speed and efficiency than was ever possible with other chips.

To be more exact, the M1 chip’s performance is 3.5x faster while its GPU performance is 6x faster compared to the Intel chips used in older Mac models.

Its CPU performance is 2x faster than the latest laptop chips while only using 25% of the power. Further enhancements are also possible through the integration of the M1 chip with Apple’s proprietary software.

The M1 chip’s 8-core CPU has four high-performance cores that allow the M1 Macs to perform power-intensive tasks. Its 8-core GPU can simultaneously run close to 25,000 threads with 2.6 teraflops of throughput, giving the M1 Macs the fastest integrated graphics in a modern personal computer.

Despite its incredible speed and performance, the M1 chip is more battery-efficient than any of the other chips Apple has used in their Mac models to date. Recent web surfing tests have found that the M1 MacBook Pro has a battery life of up to 16 hours and 25 minutes.

Can M1 Macs get viruses? 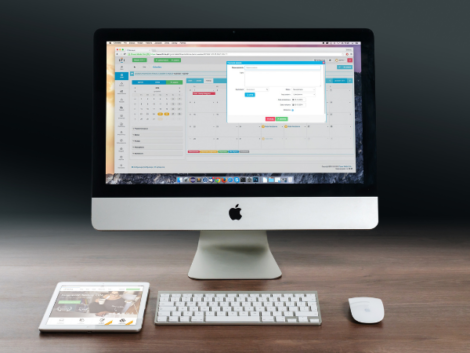 M1 Macs can be vulnerable to viruses and malware even though Macs are generally seen as safer and more secure than other PCs in the market. When it comes to the M1 Chip, reducing malware risk is a major concern.

Although the Rosetta 2 system allows for a seamless transition from one platform to another, translating old program code written for Intel x86 for M1, it cant’ differentiate between legitimate programs and x86 malware. This means threats for Intel-based Macs can run on M1 Macs.

However, the M1 Macs are more secure than the older models since the Apple Silicon chips are known to repel iOS malware. Although a few cases of M1-optimized malware have surfaced in the media, experts have dismissed them as existing malware recompiled to run natively on Apple Silicon.

These include XCSSET, Silver Sparrow, Pirrit, and Bnodlero. While there is a technical difference between Intel-based malware and malware that has been adapted for M1, they are not fundamentally new. The Pirrit Mac adware family is one example. Pirrit is an old adware family that Malware authors are continuously updating.

Moreover, the amount of malware on macOS has gone down over the past year despite the initial upward trend in malware infections following the M1 launch.

According to cybersecurity companies, the amount of malware detected on the platform decreased by 38% in 2020. Mac users can also protect their computers from threats with a dedicated security suite. 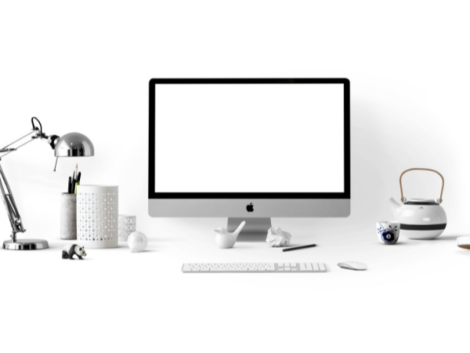 M1 computers are more secure than previous models and other Intel-based computers. According to the Apple Platform Security Guide, M1 Macs provide the same level of protection as iOS devices. The M1 chip makes it more difficult for malware to evade detection.

Intel-powered Macs have a built-in T2 chip that handles security features. This functionality is built into the M1 chips, doing away with the need for a separate chip. The M1 chip’s built-in Secure Enclave handles Touch ID. It also runs a storage controller that features AES encryption hardware for secure SSD performance.

Another security feature, Gatekeeper, blocks software that has not been digitally approved to run on Mac without the user’s agreement. This built-in feature checks that any app you install comes from a certified developer.

Apple’s malware protection software, XProtect, is a malware scanning tool that automatically runs in the background with no user configuration needed. It checks against an extensive list of malicious applications whenever the user opens a new app.

If a Mac user downloads and tries to open a malware-contaminated file, they will see a warning. This warning is saying that the file will damage their computer.

Apple regularly updates XProtect to keep your computer safe from cyber attacks. And since XProtect is written into the operating system, it will not hamper computer speed.

However, Mac users should still be vigilant about protecting their computers from viruses and malware. Apple recommends uninstalling the Safari adware extension upon detection. Also, avoiding third-party iPad apps or software that has not been signed with an Apple developer ID.

It is also important not to download suspicious files or install apps from unreliable sources. That is because cybercriminals will often try to lure Mac users into installing apps for devices like an Apple watch. Also, lure them into opening emails or links that can trigger the installation of malware.

The Apple M1 Chip vs. Intel Core i7

Intel’s Tiger Lake 11th generation processors were released shortly after as a response to Apple. Not only does Intel have to contend with Apple’s competition right now, but it is also constantly challenged by AMD processors, its main rival. And their latest Ryzen 5000 family certainly calls Intel’s superiority into question.

Nonetheless, Intel says that its Core i7 11th generation processors can deliver high-tech power. The chip has been completely redesigned in order to improve performance and efficiency. Furthermore, the Tiger Lake chips are paired with Intel Xe graphics, allowing the CPU to nearly double its benchmark stats.

However, unlike the eight-core Apple M1, the new Intel Core i7 processor is a quad-core CPU with eight threads. Even though Intel has a higher base frequency, it still falls short of the M1. So, if we ignore the software adaptation factor, the Apple M1 chip beats the Intel i7 in terms of speed and overall performance.

Will iPhones have the M1 Chip? 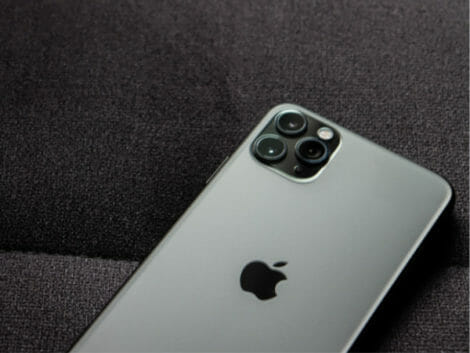 Apple decided against using the M1 chip in the iPhone and iPad apps. Instead, the company chose to build on last year’s A14 Bionic and create a completely new chip. The iPhone 13 uses Apple’s new A15 Bionic chip in all four versions, with the Pro Max and the Pro versions having an enhanced chip included with a 5-core GPU for additional graphical effectiveness.

Whatever the reason for Apple’s decision not to use the M1 chip, whether it was a compatibility issue or something else. The A15 Bionic doesn’t appear to be lacking in performance. According to the company, this new product is at least 50% faster than the competition, ensuring that the iPhone 13 remains a smartphone powerhouse.

How to Know if Your Phone Has a Virus

The launch of the M1 Macs signals Apple’s transition from chips from Intel to in-house Silicon chips by Apple. What makes the M1 chip different from other chips is that it integrates the functions of multiple processor components. This includes it being for enhanced speed, performance, and efficiency.

It also has built-in security features that help protect M1 Macs from viruses and malware. These built-in features include XProtect, which prevents Mac users from installing suspicious apps.

Although there have been reports of malware infections following the launch of the first M1 Macs, M1-optimized malware is not fundamentally different from Intel-based malware. The majority of malware attacks can also be prevented with online safety practices. That means that M1 Macs are still some of the most secure PCs available in the market today.

Disclaimer: This article is not the official guide to the M1 Chip but is based on the author’s research or own personal experience.