Tropico 6 Review – All You Need to Know

This Tropico 6 review is the latest entry into the city-building game series. This multiplayer game (allows up to 4 players) was developed by Limbic Entertainment and published by Kalypso Media.

Come back to this sixth installment to find out if you want to be a feared dictator or peace-loving statesman on the island state of Tropico and shape the fate of your republic from era to era.

Keep reading this Tropico 6 review to know more about this latest Tropico entry.

Spooky season is here! If you haven't already heard the spook-tactular tale: every Halloween we trick or treat you with some eerie decorations in #Tropico6.🎃 pic.twitter.com/a5KzfRUi13

You can send agents on raids to foreign lands to steal monuments to grow your collection.

For the first time in the Tropico series, you can now play on large Archipelagos. You can also manage multiple Islands at once while adapting to face new difficulties.

Tropico 6 now gives you the chance to choose from various extras and customize how your palace looks.

This latest version comes with a remodeled research system that emphasizes the political elements of being the biggest dictator ever seen in the island state of Tropico. 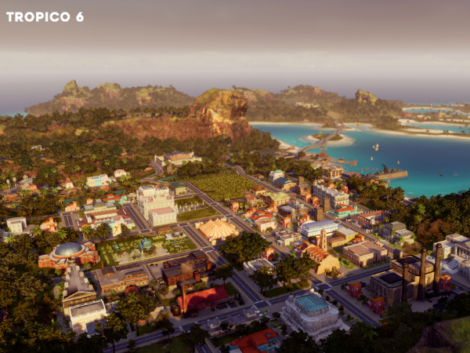 Tropico 6 is, for all intents and purposes, a city builder game with satirical undertones. Every single citizen living in your “banana republic” is simulated. You position a mine and observe the construction crew as they move to the building site. The employees begin digging for coal, uranium, or gold in the newly built mine; then, the teamsters come over to carry the raw materials for processing in the factory.

When everything is going great, the hustle and bustle on the island are quite calming. When everything isn’t going well, you will have to search through the map to find out the source of all the problems and fix them.

Some of the problems that could affect your city include scarcity of raw materials in the processing factory, transportation hitches with goods, and no shipment found at the docks. You may also have to determine why the mine hasn’t been of the construction yet and why your workers are not on site.

Your cargo ship could be of the delay and thus won’t arrive till six months. If you don’t deliver the trading order as soon as possible, the Axis forces will declare war on your city because you promised them to trade in return for winning the election. Think of any possible issue that could arise in a banana republic situation, which can happen in Tropico 6.

The individual-centered simulation means that minor issues can blow up into mega difficulties and challenges. Citizen behavior will affect the bigger systems in significant ways, which is why – although the game offers a sandbox mode with loads of different choices and islands – the Tropico series works best during campaign missions, where specific demands compel you to find a way to adapt.

On the other hand, if you play in sandbox mode, you can take your time to develop your island and work on new financial projects judiciously. This way, you can successfully keep the peace between your government, superpowers, and political factions. You are provided with the freedom and liberty to efficiently control your development as you move from era to era.

Still, from our Tropico 6 review, the missions are worth attempting to play. The satisfaction that comes from overcoming the many curveballs is unmatched. 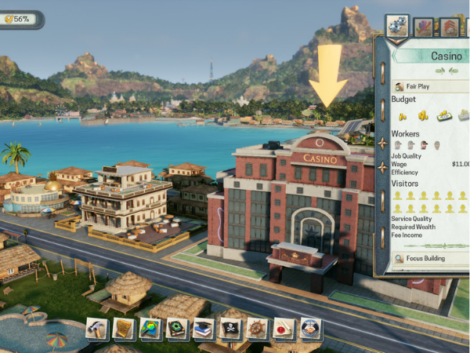 Each mission is focused on a different facet of the game, like the difficulties that come with mass tourism, the challenge of balancing international relations, the reach of propaganda, and the advantages of light piracy.

A particularly interesting mission is the one that deals with piracy. You are on an island that has practically zero natural resources. Now, you have to raid, loot and steal raw materials to manufacture goods that will profit you need to run your island city.

A raid system is a strong tool as it brings in immigrants, a consistent dribble of goods, progressive eras, good propaganda, and even fabricated tourist reviews. Creating supply chains that aren’t backed by local crops is a significant way to twist a regular campaign.

The only drawback to the raids is that there isn’t a major drawback. Foreign powers usually have a vague stand on the issue of piracy, but in this game that directly mocks international relations, it doesn’t show up.

However, at the very least, you have a bad reputation modifier for looting and stealing from popular places like the White House or national monuments such as Saint Basil’s Cathedral. It is necessary to mention here that the negative reputation modifier is quite easy to assuage.

For instance, to get rid of the negative modifier, you must construct a golf course for them. It becomes a non-issue when the nation in question contacts you again to carry out some trivial task.

Some missions you will undertake won’t be successful and easy to skate over by just doing something trivial. Take this mission, for instance, where El Presidente commences a huge experiment to put an end to housing. The mission sounds like it has potential, but in reality, it portends maneuvering around the negative modifier caused by poor housing.

Citizens can go ahead to protest and possibly rebel, yet like the superpowers, they’re also easy to mollify, even when they are homeless.

On the occasions where missions are successful, it comes with the consequence of you needing to do things that could mess with the fragile balance of your city’s economic development. If political conflict often seems controllable, financial disasters are a more urgent problem, particularly when moving to another era.

For instance, due to an outrageous demand from some faction leader, you can go from stable profit to overwhelming financial decline. This is because in trying to meet the demand, your production will no longer cover wages and general maintenance.

Best Pokemon Games of All Time

Tropico 6 is by Limbic Entertainment (a new developer for the series). However, you wouldn’t know this or notice it while playing. We found from our Tropico 6 review that this latest entry fuses Tropico 4’s political election speeches and work modes with the era system from Tropico 5. Some other new features were now on to diversify systems and make supply chains more complex.

Aesthetically, Tropico 6 looks nicer to the eyes. Also, the archipelagos, bridges, and tunnels have some new tweaks in their construction.

To sum it up, Tropico 6 is a city builder series where you can watch (simulated) people like the factory worker, the miner, and the builder. The game isn’t too spectacular, but it is far from mediocre.