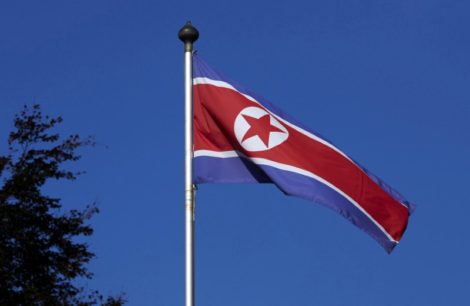 FILE PHOTO – A North Korean flag flies on a mast at the Permanent Mission of North Korea in Geneva October 2, 2014. REUTERS/Denis Balibouse

SEOUL — A toy-like robot with scowling blue eyes and a North Korean flag across its chest roams around a classroom at a university in Pyongyang in a recent demonstration of tools aimed at helping children learn basic maths, music, and English.

A second robot featured a smiley face on a screen embedded inside a white round head, while another wore a blue plastic suit and white-rimmed glasses, the KRT footage showed.

Park Kum Hee, a professor at a university in Pyongyang, told KRT that the development of the educational robots had its challenges initially, with the robots often shaking their heads when asked questions in both Korean and foreign languages.

“Upgrading this robot’s intelligence was difficult for me as someone who majored in psychology,” said Park.

“It was the words of our respected Comrade General Secretary (Kim Jong Un) on adopting artificial intelligence technology in education that has always guided me on the right track.”

North Korea reopened schools in June of last year but made it mandatory for children to wear masks in classes and washing stations were installed.

The reclusive country has not officially reported a single coronavirus case, but it has imposed strict anti-virus measures, including border closures and domestic travel curbs, and experts have said an outbreak there cannot be ruled out.