Steam Deck - Pros, Cons, and Everything Else to Know
Close
menu
search

Steam Deck – Pros, Cons, and Everything Else to Know

While most have heard about the various gaming PCs and systems available and are aware of the steam platform; the upcoming offering by the Valve developer in collaboration with Steam using the steam OS is a marriage of both ideas, resulting in a handheld gaming console more similar to the Nintendo switch in shape, but with the power of something in the Xbox series.

The Valve Steam deck will be released in February 2022 but is available for pre-order now on the Steam store.

So stick with us, and we’ll answer the burning questions you have, like what the Steam deck is? What can the Steam Deck run? How much does a Steam Deck cost? And most importantly, if you should get on.

What is a Steam Deck? 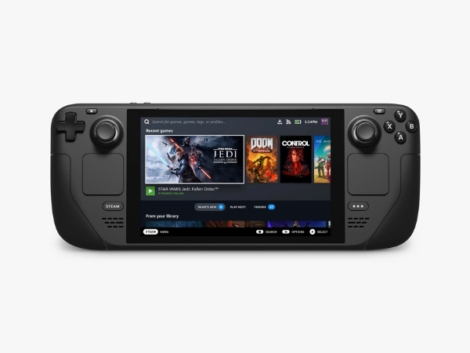 Steam, the popular website and app that has been distributing free and paid games for millennia has dipped its toes into the console market…again, but steam is intent on doing it right this time!

The Steam Deck looks like a Nintendo switch ripoff on the surface, but do not be mistaken. It is oh so much more than just a handheld gaming device. The Steam Deck runs the steam OS, allowing you to run every steam game that supports it!

Many popular games like Terraria, Hollow Knight, Stardew Valley, Left 4 Dead 2 have already released steam deck compatible versions of their games! For anyone wondering, The device has an AMD APU containing a quad-core Zen 2 CPU with eight threads and eight compute units’ worth of AMD RDNA 2 graphics, alongside 16GB of LPDDR5 RAM.

So this is not a weak device by any standards! The Steam Deck has a rich array of control options. There are two thumbsticks and two small, Steam Controller-style trackpads beneath the thumbsticks, which could give you more precision for things like first-person shooting.

The front of the Steam Deck also has ABXY buttons, a D-pad, and a 7-inch 1280 x 800 touchscreen for 720p gameplay. The device also has a gyroscope for motion controls. Like the Switch, it has two shoulder triggers on each side, and there are four back buttons (two on each side) and built-in microphones. All are coming in at a compact 1.47Ibs or 669 grams.

The Steam deck is designed to be, first and foremost, a portable PC. It can be connected to a monitor or TV and offer the full experience one would expect from any PC out there, and still be a portable and immensely powerful gaming system with as much power as the PS4 or XboxOne.

What can the Steam Deck run? 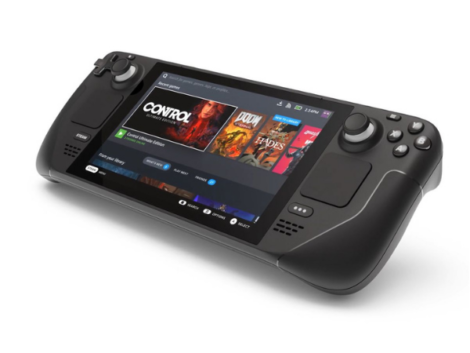 The developers of the Steam deck, Valve, have stated that the Steam deck has a minimum 30 fps target for general gaming, with leaked frame rate figures from developer kits confirming that figure.

A user who got their hands on a dev kit published a number of benchmarks of a couple of graphically intensive games. They tested DOOM, DOTA 2, the shadow of the tomb raider, and cyberpunk 2077. This gives a decent spread and sample size to gauge performance. Also, as you might have rightly guessed, Cyberpunk is one tough cookie for the AMD silicon at the heart of the Deck to chew on, but that’s when the game is running on the High preset.

Try knocking the fidelity settings down a few notches, and you will be able to enjoy smooth gaming frame rates at Medium or Low settings.

Considering just how visually intensive the game is, that’s impressive.

Another impressive feature is the Shadow of the Tomb Raider figures. Being able to hit 60 fps in the most recent of Lara’s jaunts without resorting to potato settings means the Steam Deck is genuinely to be a handheld gaming PC contender.

DOOM can also deliver 60 fps when using the Medium preset. DOTA 2, obviously not the most graphically intensive game out there, is still able to run at its peak preset at 47 fps.

And, considering this is a non-native Linux game running on pre-release hardware, the fact that Cyberpunk 2077 was the only game to crash—and just once—well, that’s pretty impressive in our book.

Valve has been speaking about game performance on its new handheld gaming PC and saying, “All the games we want to be playable is, really, the entire Steam library. We haven’t found something we could throw at this device that it couldn’t handle.”
“We’ve achieved the level of performance that is required to run the latest generation of games without problems.”

The fact that Valve has been testing games from the last year on the Deck without any notable issues may suggest that maybe, just maybe, the SteamOS 3.0’s update to Proton will give greater compatibility for Windows gaming on its Linux operating system. An issue that a previous portable gaming PC which will not be named *coughs* The Steam Machine *coughs*

It is common knowledge that one major issue with Proton, which prevents some online games from running on it, boils down to anti-cheat software incompatibility. That problem could have a solution shortly. However, as the founder of Garry’s Mod and Rust studio Facepunch Studios has confirmed that it would be working with Proton to improve its support.

You can then potentially run a lot more games easily.

Like any other PC, the Steam Deck is to be an open platform. You can install Windows on a Steam Deck. Then install other game storefronts like the Epic Store (you probably have a pile of free games in that library) or get an Xbox Game Pass.

Although we just don’t know how well non-Steam games will work on the Steam Deck, it’s a remarkably exciting idea that you might be able to play games from your other libraries on your Steam Deck, too.

According to IGN, You can even wipe SteamOS off the Steam Deck completely and just use it to run Windows. They got some hands-on time with the device, and Pierre-Loup Griffais told IGN the Steam Deck “can pretty much-run anything you can run on a PC.”

“We don’t think people should be locked into a certain direction or a certain set of software that they can install,” Valve designer Lawrence Yang said. “If you buy a Steam Deck, it’s a PC, and you can install whatever you want on it, and you can attach any peripherals you want to it.”

Is the Steam Deck worth it?

Slay the Spire is on Deck. #SteamDeck pic.twitter.com/lLDx7GAtRW

Wes Fenlon writes in his impressions that “When it works, you can almost forget that the games you’re playing on the Steam Deck were never designed for a portable machine.”

It sure sounds like high praise for Valve’s handheld. It’s still early days for the Steam Deck, though. The model Wes used was months away from the finished product. We suspect most of the work from now on will be on the software side of things, primarily Steam OS.

A promising glimpse of what’s to come, that’s for sure.

The initial reaction to the announcement of the Steam Deck has been positive. Epic Games’ Tim Sweeny and Xbox Game Studio’s Phil Spencer complimented Valve on the Steam Deck, with Sweeney calling it an “amazing move by Valve!” Spencer congratulated Valve “on getting so many of us excited to be able to take our games with us wherever we decide to play.”

And despite many outlets comparing the unit to that of the Nintendo Switch, it can generally be of recognition as the first true hybrid video game console. Valve has stated that they did not consider the Switch in designing the Deck. As say they “tried to make all the decisions really in Steam Deck that targeted that audience and that served the customers that were already having a good time interacting with the games that are on that platform, on our platform.”

In our opinion, the Steam deck is an amazing and portable PC with impressive capabilities for a device that size. It is not perfect, and the battery seems to leave a lot to be desired, but it is an exciting prospect, and we think it is worth the price.