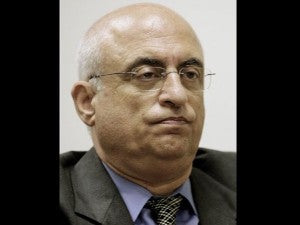 Fertility specialist, Dr. Michael Kamrava, lost his license to the California Board of Medical Examiners in Los Angeles for helping "Octomom" bear the world's largest-surviving brood of babies .(AP)

LOS ANGELES— The case of a fertility doctor who lost his license for helping “Octomom” bear the world’s largest-surviving brood of babies has rattled the field of fertility medicine in the U.S. — a $3 billion industry with little regulation.

When the Medical Board of California revoked the license of Dr. Michael Kamrava this week, it was a rare outcome that came more than two years after his patient, Nadya Suleman, gave birth to octuplets.

There are no laws in the U.S. that prevent doctors from implanting multiple embryos and possibly producing another “Octomom”-type case, but national guidelines have been tightened in the wake of Suleman’s case to restrict how many embryos can be implanted in patients.

Dr. Jeffrey Steinberg, who testified as a fertility expert in support of Kamrava during his licensing hearing, said Thursday that doctors followed the case closely but remain in a “gray zone” when it comes to navigating between patient wants and medical ethics.

In the case of Suleman and another patient, Kamrava acknowledged implanting more than the recommended number of embryos because he was trying to please insistent patients who were adamant about having a better chance for pregnancy.

“One-on-one, physicians talk about it all the time. We all pretty much feel like we have to wing it and hope for the best,” Steinberg said.

The dilemma was reflected in the “Octomom” case. Public intrigue grew as the story’s freaky dimensions unfolded with revelation after revelation.

Suleman was an unemployed single-mother who already had six children. All 14 of her children were conceived through in vitro with Kamrava. There was no father in the picture. She lived with her mom in a house that would soon be foreclosed. She seemed lost in the glare of media attention, and the public was unnerved by her sometimes glassy look and barking laughter.

Kamrava, however, escaped the same degree of public scrutiny as his case was investigated. He has continued to practice at his Beverly Hills clinic, and can do so until July 1 under the revocation order that allows him to apply for reinstatement in three years.

His only reprimand before the revocation was mostly a matter of prestige, when the American Society for Reproductive Medicine stripped him of his membership in 2009 for his treatment of Suleman.

Society spokesman Sean Tipton said Kamrava “losing his license is sort of like the sad but obvious ending in a tragic novel.”

The society tightened its guidelines for fertility doctors in the wake of Kamrava’s case, limiting doctors’ use of their discretion to increase the number of embryos implanted. The society said in October 2009 the number should never be upped by more than one from the recommended limit for a patient, as determined by age and other factors.

Suleman was 33 when a dozen embryos were implanted and led to her octuplets. Under the guidelines, no more than two embryos were recommended.

The Society for Assisted Reproductive Technology says the average number of embryos implanted by fertility doctors has consistently declined in recent years, reflecting advances in the field.

In 2009, the average number implanted for women under 35 was 2, with 1.6 percent of pregnancies involving three or more babies. By comparison, in 2003 the average was 2.7 embryos, with the percentage of triplets at 6.4 percent.

Dr. Victor Fujimoto, who testified against Kamrava for the state and heads the fertility program at the University of California, San Francisco, said Thursday there was no doubt justice has been served with Kamrava’s license revocation, and most doctors know better than to make such mistakes.

“The consensus that is very clear among my industry peers and my physician colleagues is that Dr. Kamrava operated well outside the standards,” Fujimoto said.

Steinberg said it often takes a long, hard conversation to convince a patient that implanting more embryos is not better, no matter how desperate they are to become pregnant.

“In the end that tissue belongs to the patients,” he said. “We worry about them turning around to accuse us of murder or some such thing if we don’t do as they say.”

Neither doctor believes there should be limits on how many times a patient can seek in vitro treatment. In addition, patients who want big families should be accommodated, they said.

In a span of less than eight years, Suleman underwent repeated treatments resulting in a total of 14 children, including her octuplets. In all, she was implanted with 60 embryos.

Kamrava touted his procedure in a local television news segment. As Suleman smiled in the background, he talked about how he used a small camera to see where the embryos are implanted into the womb.

Fujimoto says fertility medicine is competitive, and doctors often try to differentiate themselves by boasting specialized methods. But there is no evidence that Kamrava’s method was better than others in the field, he said.

Patients often look at published success rates before choosing where to get expensive treatments.

“Kamrava had very low pregnancy rates and that’s why he got so courageous with those embryos,” Steinberg said.

It’s unclear if more women might go as far as Suleman did to realize their dream of a large family. But doctors have likely learned their lesson, Fujimoto said.

“I can’t imagine that there will be another Kamrava,” he said. “I suspect there are always those who straddle the fence more than others. My hope is they will take this as a wake-up call and they will make efforts to improve their pregnancy rates through efforts other than using more embryos.”