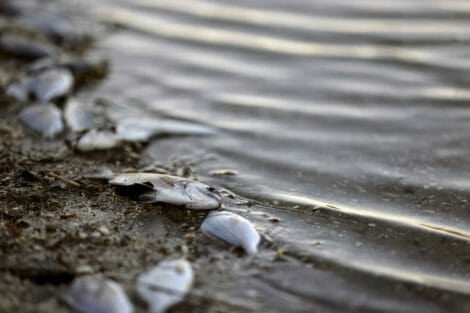 Fish that died from low temperatures, are seen at the fish farm of Ioannis Ouzounoglou in Richo lagoon, in Igoumenitsa, Greece, January 26, 2022. REUTERS/Thanos Floulis

RICHO LAGOON, Greece — Hundreds of thousands of farmed fish have died from cold in a lagoon in northwestern Greece after a heavy snowstorm crippled the country this week.

The dead fish, seabream and white seabream, began to emerge on the surface of the Richo Lagoon of Drepano Lake early on Tuesday after temperatures in the water dropped to as low as zero degrees Celsius.

“The destruction is huge, it is estimated there are around 50 tons of dead fish,” said Ioannis Ouzounoglou, who works at the state-owned fish farm, after collecting some in his rowing boat.

Countries across the region have been hit by a rare cold snap, including in Athens which was blanketed in snow.

The fish’s enclosure in the farm in the lagoon prevented them from swimming out to the deeper waters of the lake or sea to survive, scientist Konstantinos Perdikaris from the Department of Fisheries said.

“They died from thermal shock,” said Perdikaris who visited the lagoon on Tuesday.

The seabream species, unlike other fish, is sensitive to low temperatures and cannot survive below 4°C (39°F), Perdikaris said. The fish were at a shallow depth where the cold was quicker to penetrate the water.

“At shallow depths, the reaction of the air is more intense,” he said. Usual temperatures in the lagoon this time of year are about 7-8°C.

Drone video showed thousands of dead fish floating on the surface of the lagoon and on the shores.

“Every year we free them into the lake, but this year unfortunately we did not have the chance to free them in time, because the frost (came quickly),” said Ouzounoglou.

The fish farm contained more than 600,000 fish of various species. Other species were not harmed.