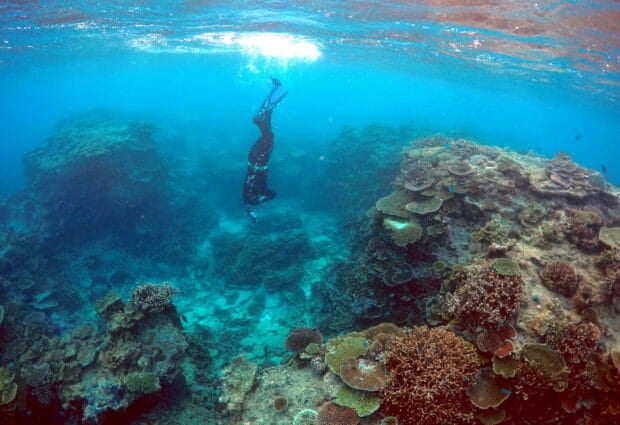 FILE PHOTO: Oliver Lanyon, Senior Ranger in the Great Barrier Reef region for the Queensland Parks and Wildlife Service, takes photographs and notes during an inspection of the reef’s condition in an area called the ‘Coral Gardens’ located at Lady Elliot Island and 80 kilometers north-east from the town of Bundaberg in Queensland, Australia, June 11, 2015. REUTERS/David Gray

SYDNEY —  The Australian government will outlay a further A$1 billion ($703 million) to help protect the Great Barrier Reef, Prime Minister Scott Morrison said on Friday, months after keeping the tourist attraction off the “in danger” list of a U.N. panel.

The additional funding over the next nine years will add to an existing A$2 billion package designed to shield the reef from environmental threats over the next three decades, Morrison said.

“We are backing the health of the reef and the economic future of tourism operators, hospitality providers and Queensland communities that are at the heart of the reef economy,” he said in a statement.

One of Australia’s best-known natural attractions, the reef came close to being listed as an endangered World Heritage Site by the United Nations last year. After intense lobbying by Australia, eager to avoid such a politically embarrassing classification, the U.N. panel deferred a vote until early 2022.

The Great Barrier Reef, made up of more than 3,000 individual reefs stretching for 2,300 km (1,430 miles), has lost more than half its coral over three decades with marine heatwaves triggering three major bleaching events in the past five years.

The plan was welcomed by the World Wide Fund for Nature but Greenpeace said it was “astounding” to see the government allocating more money while ignoring climate change, which it blamed as the main reason for the reef’s destruction.

Morrison, under pressure at the start of an election year over his handling of the country’s worst COVID-19 outbreak fuelled by the Omicron variant, said the investment will support about 64,000 jobs in Queensland. The reef draws about 5 million visitors a year.

The northeastern state will be a major battleground when Morrison returns to the polls before May, seeking a fourth consecutive term for his party, with his conservative coalition winning the majority of seats there in the last election.