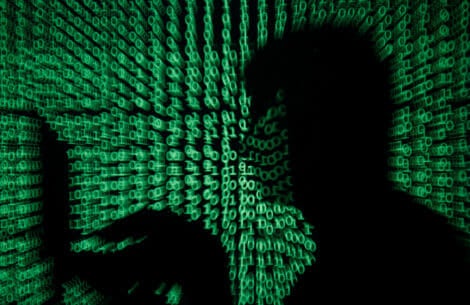 FILE PHOTO: A man holds a laptop computer as cyber code is projected on him in this illustration picture taken on May 13, 2017. REUTERS/Kacper Pempel/Illustration

TOKYO — Japan will consider imposing tighter curbs on companies in security-sensitive sectors that procure overseas software as part of efforts to ramp up steps to counter cyberattacks, according to a proposal by a key panel released on Tuesday.

The move would be part of Prime Minister Fumio Kishida’s initiative to defend Japan’s economic security mainly against China, such as by preventing leaks of sensitive technology and building more resilient supply chains.

In the proposal, the panel called for crafting legislation that allows the government to order companies to provide advanced information when updating software or procuring new equipment, and vet purchases that could put Japan at risk of cyberattacks.

The regulation would target companies in industries critical to national security such as energy, water supply, information technology, finance, and transportation, the proposal said.

“Due to rapid digitalization in today’s world, almost all areas of economic activity including those involving critical infrastructure are targets of cyberattacks,” the panel said in explaining the need for fresh legislation.

“It’s important to ensure any regulation does not excessively restrict business activity,” it added.

The proposal by the panel of academics will serve as a platform for legislation the government will submit to parliament later this month.

Advanced economies, including the United States and Japan, have faced several major cyberattacks recently including those with ties to Russia and China.

Japan is under pressure to follow in the footsteps of the United States in boosting counter-measures against cyberattacks and compete with Beijing’s growing push to export sensitive technologies such as commercial drones and security cameras.

Aside from domestic efforts, Tokyo is coordinating with its allies to help Asia boost resilience against risks to economic security, Masato Kanda, vice finance minister for international affairs, told Reuters.

“Japan is working with the United States and Australia to support the creation of trustworthy communication infrastructure in Asia, mainly through funding aid via state-owned financial institutions,” Kanda said.