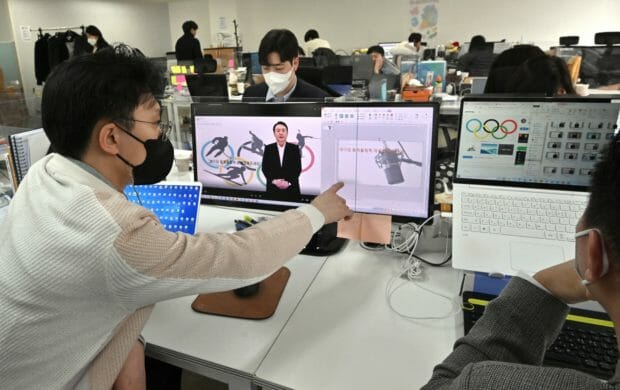 This picture taken on February 7, 2022 shows Baik Kyeong-hoon (L), director of the “AI Yoon” team, making a video clip using “AI Yoon”, a digital avatar of South Korean presidential candidate Yoon Suk-yeol of the opposition People Power Party, at an election campaign office in Seoul. – At first glance, AI Yoon could pass for an actual candidate — an apt demonstration of how far artificially generated videos, known as deepfakes, have come in the last few years. (Photo by Jung Yeon-je / AFP)

Armed with hours of specially-recorded footage of opposition People Power Party candidate Yoon Suk-yeol, the team has created a digital avatar of the frontrunner — and set “AI Yoon” loose on the campaign trail ahead of a March 9 election.

From a deepfake video of Barack Obama insulting Donald Trump to failed New York mayoral candidate Andrew Yang campaigning in the metaverse, AI technology has been used in elections before.

But AI Yoon’s creators believe he is the world’s first official deepfake candidate — a concept gaining traction in South Korea, which has the world’s fastest average internet speeds.

With neatly-combed black hair and a smart suit, the avatar looks near-identical to the real South Korean candidate but uses salty language and meme-ready quips in a bid to engage younger voters who get their news online.

It’s been a huge hit. AI Yoon has attracted millions of views since making his debut January 1.

Tens of thousands of people have asked questions, but it’s not the usual policy-related fare.

“President Moon Jae-in and (rival presidential candidate) Lee Jae-myung are drowning. Who do you save?” one user asks AI Yoon.

“I’d wish them both good luck,” the avatar snaps back.

At first glance, AI Yoon could pass for an actual candidate — an apt demonstration of how far artificially generated videos, known as deepfakes, have come in the last few years.

The real Yoon recorded more than 3,000 sentences — 20 hours of audio and video — to provide enough data for a local deepfake technology company to create the avatar.

“Words that are often spoken by Yoon are better reflected in AI Yoon,” said Baik Kyeong-hoon, the director of the AI Yoon team.

What the avatar actually says is written by his campaign team, not by the candidate himself.

“We try to come up with humorous and satirical answers,” Baik told AFP.

The approach has paid off. AI Yoon’s pronouncements have made headlines in South Korean media, and seven million people have visited the “Wiki Yoon” website to question the avatar.

“If we had only produced politically correct statements, we would not have this reaction,” Baik said.

“The political establishment has been too slow in the face of a fast-changing society,” he added.

“I want to ask Moon Ding Dong this question: Who is our real enemy?” AI Yoon says, in a thinly-veiled swipe at what his critics say is the president’s more conciliatory approach towards Pyongyang.

The avatar politician has also used humor to try and deflect attention from Yoon’s past scandals, for example claims he received inappropriate fruit gifts from a construction company when he was a senior prosecutor.

“I am not beholden to persimmons and melons. I am only beholden to the people,” AI Yoon said — although his campaign was later forced to acknowledge he had accepted some gifts.

The kind of script used by the campaign for AI Yoon draws on the language used in the online gaming world, Kim Myuhng-joo, professor of information security at Seoul Women’s University, told local media.

“AI Yoon reads off the scripts compiled by its creators, who do not mince words,” Kim said.

But the snark is working: while polling for the March 9 election remains neck-and-neck, Yoon has pulled ahead of rival Lee Jae-myung with voters in their 20s.

Tech-savvy Baik and his two other team members — all in their 20s and 30s — are some of the youngest staffers in the sprawling Yoon campaign.

They come with AI Yoon’s responses in rapid-fire brainstorming sessions, which can take as little as 30 minutes, in contrast to the carefully-honed rhetoric usually found in public policy debates.

South Korea’s election monitor allows AI candidates to campaign on the condition it is clearly identified as deepfake technology, and does not spread misinformation.

The technology has more often been flagged as harmful — the 2018 deepfake video of Obama was produced by Oscar-winning filmmaker Jordan Peele to warn viewers about trusting material they encounter online.

But Baik thinks AI is the future of election campaigns.

“It’s so easy to create huge amounts of content with deepfake technology,” he told AFP.

“It is inevitable that this will be used more and more.”

Recto calls for Senate inquiry into proliferation of ‘deepfakes’

Are we ready for deepfakes?

Lucasfilm hires YouTuber who created own take on ‘The Mandalorian’ deepfake