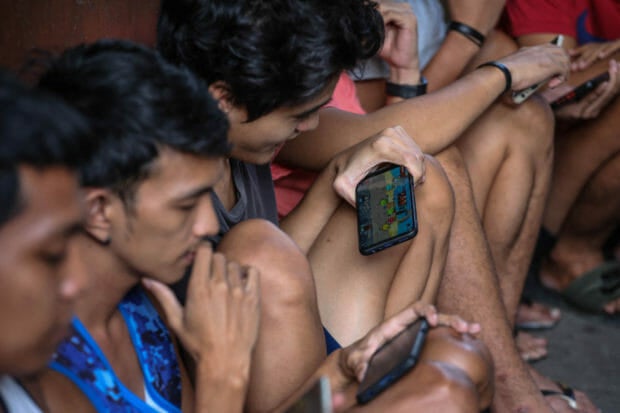 This photo taken on December 15, 2021 shows people using their mobile phones to play Axie Infinity, an NFT game where players earn tokens that can be exchanged for cryptocurrency or cash, in a neighborhood alley in Malabon, suburban Manila. AFP FILE PHOTO

MANILA, Philippines — Dominic Lumabi sits on the computer in his Manila bedroom pitting his puffer fish-like cartoon NFT characters against others. But this is not just a game — he is earning cryptocurrency to support his family during the pandemic.

The source of his income is Axie Infinity, a blockchain-based play-to-earn game that exploded in popularity in developing nations such as the Philippines as Covid-19 destroyed jobs and forced many to stay home.

Its fans, financial backers and creators — Vietnam-based Sky Mavis — say it is a revolutionary step towards the future of the internet.

Detractors warn the game is a “house of cards”, some likening it to a fraud scheme driven by hype and speculation.

“At first, I was skeptical because I thought it was a Ponzi scam,” said Lumabi, 26, who began playing last June after losing his job at an advertising firm and making a failed foray into online selling.

About 35 percent of Axie Infinity traffic — and the biggest share of its 2.5 million daily active users — comes from the Philippines, where high proficiency in English, strong gaming culture and widespread smartphone usage have fueled its popularity, Sky Mavis said.

In Axie Infinity, players participate in battles using colorful blob-like Axies, and are mainly rewarded “Smooth Love Potion” (SLPs) that can be exchanged for cryptocurrency or cash — or invested back into the game’s virtual world Lunacia.

Lumabi plays for two hours a day in the tiny house he shares with his parents and four sisters, earning 8,000 to 10,000 pesos ($155 to $195) per month — nearly half of what he makes at his current job as a content moderator working nine-hour graveyard shifts.

The pandemic was the perfect environment for this game to attract players from all walks of life, said Leah Callon-Butler, a blockchain consultant based in the Philippines.

“They could sit at home, protected from the virus, and play a cute game and earn money from it.”

But there is a catch.

To play the game, players first have to purchase at least three Axies. 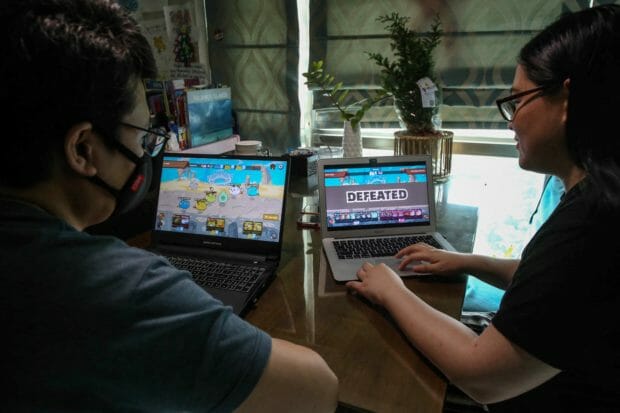 This photo taken on December 10, 2021 shows siblings Eugene (L) and Ginger Arboleda giving a demonstration on how to play Axie Infinity, an NFT game where players earn tokens that can be exchanged for cryptocurrency or cash, during an interview with AFP in Taguig, suburban Manila. AFP FILE PHOTO

An Axie is an NFT — a unique, non-fungible token, with a particular set of abilities and characteristics. Like NFT pieces of art, they are stored on the blockchain — a digital ledger that cannot be changed.

Axies can be bought, sold or rented to other players. Owners can also breed them to create new Axies that provide more value.

At the peak of the game’s growth last year, a starter team of Axies could cost hundreds of dollars, far beyond the reach of aspiring players in poorer countries.

When AFP accessed the game’s marketplace on February 9, the cheapest Axies cost $37 each, putting the cost of a basic team at $111.

However, players who spend more get better Axies, giving them a better chance of winning battles to earn SLPs and — from some activities — the game’s other crypto token AXS.

Those with the capital to assemble more lucrative Axie teams have set up guilds and “scholarships” — profit-sharing systems where players are charged a percentage of their earnings.

The owners’ take can reportedly go as high as 30 percent.

“We provide the players with the assets that they need to generate income for themselves,” said Luis Buenaventura, who runs Yield Guild Games in the Philippines, one of the many companies offering scholarships.

“In exchange for that, we ask for 10 percent of their earnings.”

YGG alone has 8,000 scholars and a queue of around 60,000 people waiting to join its program that offers training and mentoring to a limited number of players at a time.

Buenaventura said many of his players were in their early 20s and from households making less than $400 a month.

He described their monthly Axie winnings — around $200 — as “life-changing”.

As the number of daily active players skyrocketed in 2021, the price of Axies and SLPs also soared, raising questions about the game’s sustainability.

Sky Mavis earns revenue from the game mainly through breeding and marketplace fees, and Axie Infinity has generated more than $1.2 billion in revenue. It has also attracted deep-pocketed backers, including US billionaire Mark Cuban.

But some gaming industry analysts say its business model is unsustainable, pointing to the need for new players to keep money coming in.

Jonathan Teplitsky of blockchain firm Horizen Labs warned most play-to-earn games were a “house of cards”, fueled by “hype and price speculation”.

“This entire system works well while the Axie company is flush with cash and willing to fuel a massive marketing machine,” he said.

“If Axie wants to survive the next market crash, they will need to build some real-world utility into their game that does not depend on the mood of the markets.” 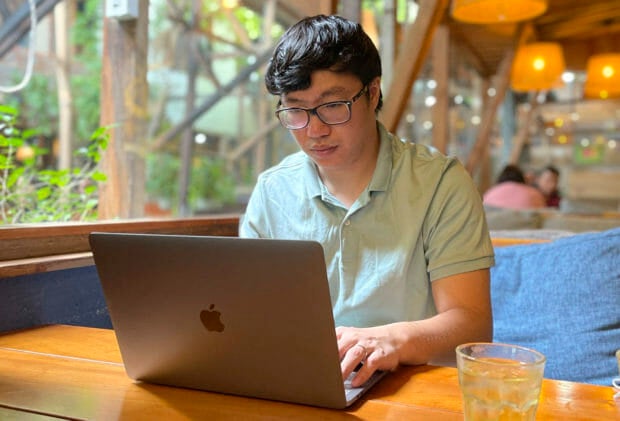 This handout photo taken and received on December 10, 2021 and released courtesy of Axie Infinity co-founder and CEO Trung Nguyen shows Nguyen working at a cafe in the central Vietnamese city of Nha Trang. AFP FILE PHOTO

“There are a lot of things other than monetary value that people can get from the game.”

It had been clear for months, however, that the game was facing an issue with its economy, and the SLP and the AXS have experienced the kind of volatility seen in many other crypto assets.

Last year, as the game upgraded to allow easier and cheaper trading, the value of SLP rocketed from 3.5 cents on April 26 to 36.5 cents on May 2 — more than 900 percent in less than a week — according to crypto data provider CoinGecko.

But by the end of January this year, it had plunged to just a cent — a huge impact on how much fiat currency players could earn.

Sky Mavis has made some tweaks to the game to limit how many SLPs a player can generate, acknowledging concerns about inflation and unsustainability.

The currency has since recovered slightly to around three cents, but still far from the 2021 gold rush peak.

“People are starting to understand that it’s not free money falling from out of the sky, you do have to understand how to play this game well,” said YGG’s Buenaventura.

Adding to the woes of players in the Philippines, the country’s tax authority said last year that players should pay tax on their winnings from the game.

In Manila, Lumabi’s monthly earnings have more than halved since he started playing, but he is unfazed by the volatility.

He recently bought two teams of Axies for his girlfriend and one of his sisters. He plans to turn them into Axie Infinity scholars.

“As long as I can earn 100 pesos or a thousand a month, my perspective is it is still a profit,” he said.

“It’s still another source of income.”

What is an NFT? NFTs fully explained