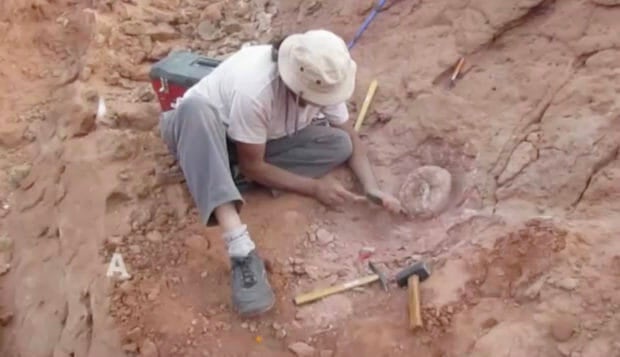 Argentine scientists have discovered the skull base of a new species of carnivorous dinosaur, a relative of the abelisaurids, in northern Argentina, providing further information on the inhabitants of South America some 70 million years ago during the Late Cretaceous. Screengrab from Reuters

BUENOS AIRES — Scientists have unearthed in Argentina the remains of a previously unknown species of meat-eating dinosaur that lived about 70 million years ago that had puny arms and may have used its powerful head to ram its prey.

The fossil skull of the Cretaceous Period dinosaur, named Guemesia ochoai, was discovered in Argentina’s northwestern Salta province. The researchers said it likely belongs to a carnivorous group of dinosaurs called abelisaurs, which walked on two legs and possessed only stub-like arms, even shorter than those of North America’s Tyrannosaurus rex.

The short arms may have forced Guemesia to rely on its powerful skull and jaws, the researchers said.

“It’s so unique and so different from other carnivorous dinosaurs, which allows us to understand that we’re dealing with a totally new species,” Federico Agnolin, lead author of a study on the dinosaur published in the Journal of Vertebrate Paleontology and a researcher with Argentine national science council CONICET, told Reuters.

The animal, possibly a juvenile, lived just a few million years before an asteroid impact at what is now Mexico’s Yucatan peninsula wiped out about three-quarters of Earth’s species including the dinosaurs about 66 millions years ago.

Scientists believe abelisaurs roamed what is now Africa, South America and India, and several dozen specimens have previously been dug up in Argentina – nearly all of them in southern Patagonia, far from the site of Guemesia’s discovery.

“We know it had a very sharp sense of smell and was short-sighted,” said Agnolin, noting that it would have walked upright on its large feet, with its solid cranium leading the way.

“Some scientists think that could mean the animal hunted its prey by charging them with its head,” Agnolin added.

The discovery adds to Argentina’s reputation as a treasure trove of fossils of dinosaurs and other prehistoric creatures.

Guemesia takes its name from Argentine independence hero Martin Miguel de Guemes and Javier Ochoa, a museum worker who made the discovery.