There Official Elden Ring Review – Is it Worth Playing?

So, this new video game is trending, and every game lover is crazy about Elden Ring, but you have no idea what it is, huh? Don’t worry, foul Tarnished. In no time, you will be a great warrior, battling eldritch monstrosities and crafting the finest steel. Here is the official Elden Ring review.

What is Elden Ring? 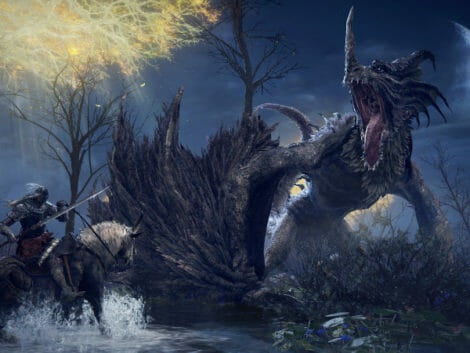 Elden Ring is a very amazing and imaginative dark fantasy action role-playing game (RPG) produced by Bandai Namco Entertainment and developed by FromSoftware, the creative minds of the chart-topping Dark Souls series. The video game was designed in synergy with the popular George R. R. Martin, writer of The Game Of Thrones Series, who furnished and provided setting materials.

When it was disclosed at E3 2019, it quickly generated the top-chart of many “most anticipated” catalogs due to the influence and participation of Game of Thrones author George R.R. Martin. Instead of making sure that The books–Winds of Winter and A Dream of Spring were finished, the brilliant author marched on to work on video games for a short time, much to the dismay of his book fans everywhere. To be very honest, it was worth it, and Elden Ring takes its place as one of the best video games of all time in terms of so many reviews.

Elden Ring is a true work of art with its theme, settings, and progressive nature. The game begins with a quick tutorial that acquaints a player with the basic combat mechanics. Elden Ring throws you into The Lands Between, a vast and varied landscape with a backstory written by Game of Thrones George RR Martin.

And, in case you do not already know this, the myths are just as incredible and devilishly choked up with excitement as you can imagine. This is expected from a collaboration between the magnificent author, George R.R. Martin, and the innovative Dark Souls team.

While some players of other franchises might assume that there will be a mini-map with a very clear, intentional indicator to instruct where to go, Elden Ring only gives you a vague hint of which direction you should go. You are free to ignore that hint. In reality, straying from the intended direction is highly supported, and you get rewarded for your curiosity at nearly every junction.

No matter that, the biggest battles in Elden Ring are extremely difficult to conquer. Insignificant enemies can also exterminate you. If you are not careful, the game makes great efforts to make you feel comfortable and safe as you venture into The Lands Between.

You can flee or fast-travel from anywhere, to do something else, especially when escaping from combat encountered while playing. And the glory of the game is concentrated in the ‘doing something else’ section. It appears that there are surprises around every corner.

The Gameplay of Elden Ring

At least he went out with some flair. #PS5Share, #ELDENRING pic.twitter.com/EuZxczuzSv

Demon’s Souls and Dark Souls did not just deliver a whole category and enraptured its loyal fans. All by continuously repeating ideas and games the developer had already done. They began the trend of unique video games. Elden Ring simply flowed with the process by using many of the same components from previous games.

Elden Ring, the successor to the soul series by FromSoftware’s Souls, is grand compared to preceding games, and its contents are Dark Souls in its open world.

The game may be a subtle reminder for you for about two to three hours when you begin the game for the first time. You may remember calmer times in a game like Breath of the Wild. However, FromSoftware strictly adheres to its constant traditional brutality. It is not easy. However, it is possible to evade some of the third-person, hack-and-slash battles that would destroy you in another Souls game because of the open world.

More tips for starting your adventure, out tomorrow: https://t.co/IPmqOgI2Qn pic.twitter.com/0unU76SrWH

Elden Ring has the same deliberate combat standard for these games, but it is fully refined. You swing, your opponent swings, and you can both interrupt each other’s attacks with precise timing. The greatest Elden Ring combat is similar to the best Souls combat. It needs your attention to your rival’s thrust and detects an opportunity to wound them when they miss. In action, it’s almost a sudden change, with you making your move while waiting for your rivals to attack you.

These games are engaging because most times, you do not feel like your opponents are entitled to a different set of rules than you. So when you find an opportunity to win, be it through magic conjuration, or incendiary bombs, you get the winning vibes as you have won the game.

Elden Ring resounds a few of the series’ best fights. This is with gigantic bosses and mass forces of enemies putting you in a position to make very fast decisions about your priority at the moment. However, it also replays some of the series’ worst. With late-game enemies and bosses with very good health rates that make it difficult to beat them for fun.

What is the Cost of Elden Ring?

If you are hunting for a way to get your gaming hands on the latest release from FromSoftware for a minimal fee, you got to be on the lookout for the Elden Ring price right now. As video games are increasingly more expensive, you may benefit by patiently waiting for a few weeks for a noticeable discount. On the other hand, long-term fans may find it difficult to stomach missing out on day one.

That’s why we’re already scouring the web for the best Elden Ring deals, surfacing any that we find right here. With a starting price of $59.99 / £49.99 for the base model, there’s plenty of room for that price to wiggle. However, given the incredible popularity of this title, any savings will be well worth taking advantage of.

However, if you taste rich quality, go for Elden Ring deals on the Deluxe Edition, and you can also go for the elusive Collector’s Edition. At the same time, the latter is a little more difficult to obtain right now.

We’ve compiled a list of exactly what you get in both. As well as all of the most recent stock options. All the precedent deals for PS5 and Xbox Series Xs can be located on the following price of Elden Ring video game.

If you want more than the $59.99 / £49.99 price offers, the Deluxe Edition and Collectors Edition are for you. The Deluxe Edition, which includes a digital artbook and soundtrack, is currently available at various retailers for $79.99 / £64.99.

Amazon has the Elden Ring Deluxe Edition for $79.99.

On the other hand, the Collector’s Edition is required for the complete set. This set costs $189.99 / £189.99 and includes a 9-inch Statue of Melania – Blade of Miquela, steelbook, 40-page hardcover art book, and digital soundtrack. However, stock on this pre-order edition has been scarce since its release.

Which Consoles Can You Play Elden Ring On?

Elden Ring functions perfectly well on the PlayStation 5, Xbox Series X/S, and even precedent consoles like the PlayStation 4 and Xbox One are not left out. PCs can also handle the Elden Ring game. Technically, the PC isn’t a “console.” However, it’s also not the best platform for getting the most out of Elden Ring, and we recommend getting it on your console instead because PC players have reported a slew of technical issues since the game’s release.

Elden Ring is an open-world action role-playing game set in a vast, desolate world filled with large trees, beasts, and magic. It reevaluates important and basic ideas of the invented open-world genre. It does this in a magnificent way that you come to terms with the fact that a lot of the precedent, innovative games of open-world. Also, it all depends on concepts that a lot of gamers may have accepted as the utmost standard without reasoning and questioning whether or not they are important and their ultimate contribution.

Elden Ring succeeded in creating a world that is epic. This is all in a unique way while also making sure to create advancing consistently extraordinary content, despite all odds. Every fraction of Elden Ring is greatly diverse and lacks any empty content. That sense of awe and unknowing that is so characteristic of FromSoftware’s unique RPGs has become an utterly ideal setting for an open-world format that some AAA publishers have abused to the point of absurdity.

Elden Ring is like a juicy meal for starving fans of FromSoftware. It is completely void of any problematic feature. This is why these games are so addictive and imprint their intricate fiction on the minds of their fans. However, its adherence to the past is distracting.

It lessens the impact of those moments when Elden Ring transcends its past. This is to show why FromSoftware’s games are unrivaled by those who try to emulate them. Elden Ring’s logic reminds you that no other developer creates fantasy worlds that are as engaging on multiple occasions.