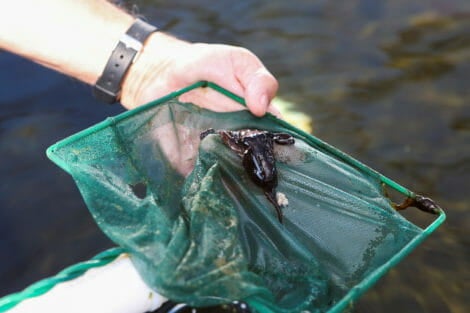 SISAL, Mexico — When Mexican biologist Carlos Rosas dips his hand into the water of a large open-topped tank and brings it to the surface, there is a tiny purple baby octopus, no bigger than a tennis ball, in his palm. It squirms and slithers before slipping from his hand back into the tank, the only home it has ever known.

This octopus, along with about 250 others, lives in captivity as part of a community project in Sisal, a fishing community in Mexico’s Yucatan Peninsula, that started 15 years ago as a women’s collective.

With guidance from Rosas, a professor at the National Autonomous University of Mexico (UNAM), the small octopus farm developed a patented food for the highly intelligent cephalopods. The farm expanded, now employing older fishermen and their wives, offering a way to earn money back on land when the grueling work at sea becomes too much.

Octopus are notoriously difficult to raise in captivity, but rising ocean temperatures due to climate change and overfishing in some parts of the world are reducing the population in the wild. Meanwhile, a rise in disposable income and preference for international cuisine are making octopus a popular ingredient in tapas, ceviche, and soups.

Scientists and activists, however, have raised ethical questions about breeding octopus. Researchers last year concluded octopus are sentient beings, capable of experiencing distress and happiness, and that high-welfare farming would be impossible.

After much trial and error, Rosas’ team found success with food made from fish waste – like heads – that would otherwise be tossed back into the sea.

They blend the waste in a machine, creating a paste-like substance that is then formed into pellets. The octopus seems to like it. It’s a win-win, Rosas said. Fishermen earn extra money by selling their waste and the farm gets what it needs to feed the octopus.

“We are going to make the fishing industry a more efficient industry at the same time that we improve octopus production,” Rosas said.

The farm’s formula has attracted international attention. Spanish company Nueva Pescanova, which plans to open the world’s first commercial octopus farm next year, wants to test the food, and even send its own fish waste to Sisal to have it made into food, Rosas said.

Nueva Pescanova, in a statement shared with Reuters, said a food for farmed octopus was being developed based on the UNAM model, which it described as “a circular economy solution.”

The right food and conditions for octopus in captivity are also difficult to crack. In the wild, they eat only live food, said Sarah McAnulty, a U.S.-based cephalopod biologist. As carnivorous creatures, they are known to cannibalize each other, or even eat their own arms, under stress in captivity.

“They’re solitary animals,” McAnulty said. “When you want an animal to be raised for farming, you want a lot of them in a relatively small place, and so you can’t really keep them happy together.”

There is pressure to push forward with commercial farming as global demand grows and the market is expected to reach 688,382 tons by 2025, according to Renub Research. That’s a nearly 64% increase compared to the 420,000 tons produced in 2018, data from the Sustainable Fisheries Partnership shows.

In Rosas’ eyes, that makes Mexico, already a top global producer, a prime place to develop octopus aquaculture. A successful commercial farming industry could relieve pressure on the wild population, he said, including the octopus maya, native to Yucatan.

The Mexican branch of Oceana, a conservation group, sees it differently. Rather than focusing on octopus farming, more efforts should be made to preserve the country’s fisheries by better regulating fishing permits, Vice President Renata Terrazas said.

Oceana is currently working to create a legal framework that forces Mexican authorities to rebuild fisheries that are depleted, but there is little information on the stock assessments, particularly of octopus, making it difficult to know the status of fisheries.

“If your bet for keeping seafood in a country is aquaculture, basically what you’re saying is, ‘I don’t want to do anything with the oceans and I don’t care if we are depleting them,” Terrazas said.

“That switch is very dangerous,” she added.

Rosas acknowledged that more studies were needed to ensure the well-being of farmed octopus. For the farm in the Yucatan, though, other factors are at play.

“We think that we also have to think about the well-being of our population,” Rosas said. “…the retired fishermen who experience conditions of poverty and for whom farming represents an alternative to improve their economic conditions.”

Vietnam’s ‘crazy guy’ aims to save ocean from waste