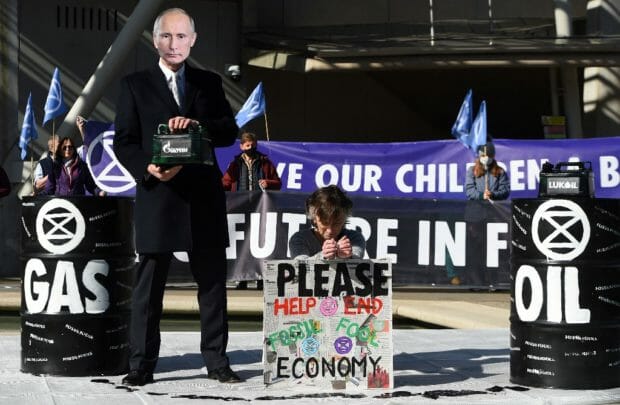 An activist from the Extinction Rebellion protest group, wearing a mask depicting Russian President Vladimir Putin, holds a ‘Gazprom’ branded fuel container, as they demonstrate against fossil fuel use, outside of the Scottish Parliament Building in Edinburgh on April 1, 2022. (Photo by ANDY BUCHANAN / AFP)

LONDON — Britain insisted Thursday it was sticking to its climate change goals despite announcing plans to drill for more North Sea fossil fuels as a way of preventing energy “blackmail” by Russia.

After weeks of cabinet infighting, the government finally released a long-promised energy strategy as Britons struggle with soaring prices, following Western sanctions against Russia over Ukraine.

The plan envisions eight new nuclear stations, a five-fold increase in solar generation and enough electricity from offshore wind to power every UK home by 2030.

But to the dismay of environmentalists, the politically charged issue of onshore wind turbines — cheaper and quicker to build than offshore — was left on the back burner.

Johnson, however, said he was taking a “sensible and pragmatic view” on hydrocarbons “in the interim to the transition to net zero” — a goal that he had proclaimed at November’s COP26 climate summit in Scotland.

“This is about tackling the mistakes of the past and making sure that we are set well for the future,” he told reporters.

“And we are never again subject to the vagaries of the global oil and gas prices and we can’t be subject to blackmail, as it were, from people such as Vladimir Putin, we have energy security here in the UK.”

The prime minister was speaking on a visit to a giant nuclear plant under construction at Hinkley Point in southwest England — which is years overdue and billions over budget.

If all the bets come off, according to the strategy, Britain could derive 95 percent of its electricity from low-carbon sources by 2030.

The government acknowledges that the strategy will do little to curb household energy bills in the near term, which Johnson said had “absolutely soared” after the Russian president’s invasion of Ukraine.

Rebecca Newsom, head of politics at Greenpeace UK, said: “This strategy comprehensively fails to stand up to Putin’s violence, to take the sting out of soaring energy bills, or take control of the spiralling climate crisis.”

The government plan flagged a new competition to find UK manufacturers of electric heat pumps — which are much more efficient than gas-fired household boilers, but also much more expensive.

Otherwise, as critics noted, it had nothing to say about cutting down on energy wastage and improving efficiency in homes, after the finance ministry reportedly vetoed new spending on that front.

Instead, he said, the strategy was “an uninspiring mix of more of the same and … does very little to meet the nation’s zero-carbon mantra shouted so loudly at COP26”.

United Nations secretary-general Antonio Guterres, marking the launch Monday of the latest UN report on climate change, said it was “moral and economic madness” to invest any more in fossil fuels.

The 3,000-page report warned that countries risk ending up with trillions in worthless assets such as offshore platforms and pipelines when demand for fossil fuels wanes in coming decades.

For the UK government, however, political pressure to tackle the energy crisis has been heating up ahead of nationwide local elections on May 5.

“And people are paying higher bills as a result,” he told BBC radio.