technology / Internet
Internet
Only to rebrand as business pages later on 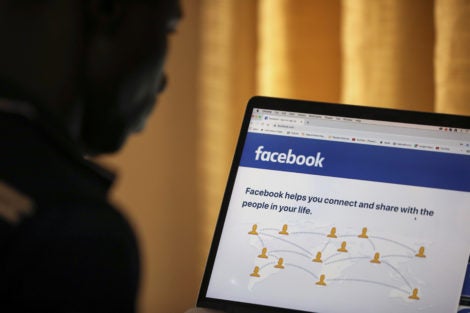 FILE PHOTO: A man opens the Facebook page in this file photo. Reuters

MANILA, Philippines — There are some Facebook groups and pages which have been using the 2022 general elections to their advantage by posting about politics and eventually getting a bigger audience — and eventually earning more money — social media company Meta warned.

Meta officials in a press briefing on Thursday said that they expect these accounts, which are not really political in nature prior to the election season, to revert to being business-oriented pages once the polls are over.

Facebook’s Threat Disruption director David Agranovich said this is still part of the inauthentic behavior they have observed on their platforms during election season.

“As with any major civic events, we’re seeing inauthentic behavior operators in the Philippines, in particular from the Philippines, Vietnam, United States, and Thailand, active on the margins of the elections.  These are focusing on growing their audiences, primarily for eventual monetization, by making money or to make their clients’ content more popular,” Agranovich told reporters.

“So we’ve removed several clustered activity that switch the focus of the pages or groups to the elections, and attempted to increase the size of their audiences.  In one case we saw a network that included a string of pages shifted from non-political topics to political,” he added.

In a separate newsroom post from Meta, the company said they saw a page that shared “non-political dance videos” rename itself to “Bongbong Marcos news”, in reference to the former senator who is running for president in the 2022 polls.

Meta said another page which started off as a support page for a politician changed its name to “Your Financial Answer”, and started posting loan advice — proving that some pages are using the elections to grab attention and audience share.

According to Agranovich, they have monitored clusters of accounts that are based in other countries like the United States, Vietnam, and Thailand, which are pretending to be based in the Philippines and are engaging in these activities.

Meta said some of the pages identified last February were traced to Vietnam, using virtual private networks to make it seem that they are in the Philippines. The names used by the networks in Vietnam, the social media company said, range from Philippines Trending News, Duterte Live, Related to Francis Leo Marcos, and Pinas News

“We’ve removed multiple clusters of activities, from Vietnam, Thailand, and the United States which pose as members of local communities in the Philippines in apparent attempts to monetize people’s attention on the election, by either selling merchandise, or trying to drive them to ad-covered platform or website,” he said.

Agranovich clarified though that such activities are different from coordinated inauthentic behavior (CIB), which has been a common basis as to why accounts operating in the Philippine setting were taken down.

While CIB focuses on the quality of the message by letting fake accounts operate seemingly independent of the network, the practice of gaining a bigger audience by taking advantage of the elections leans more to the quantity of people who would get hooked to their pages.

“As you can see, unlike coordinated inauthentic behavior which tends to be more sophisticated fake-account based operations, these less-sophisticated but nonetheless persistent operators typically focus on quantity, rather than the quality of their engagement,” he explained.

“When we take them down we typically see them trying to reconstitute their activity on the platform, and when they — because they so often work at a scale where their goal is to be as loud as possible, we counter these activities through large volume automated detection and enforcement, complimented by expert investigating teams that work to identify new tactics,” he added.

Meta’s warning came as it announced how they are preparing for the possible deluge of misinformation, hate speech, harmful and misleading content as the May 2022 general elections in the Philippines nears.

According to Meta, they have activated tools and information campaigns that would allow the electorate to be directed to legitimate information from their partners, like the Commission on Elections (Comelec).

Earlier too, Meta announced the takedown of two networks of accounts — one belonging to communist insurgent group New People’s Army and another to a group of so-called ‘hacktivists’, for violating Facebook’s community standards.