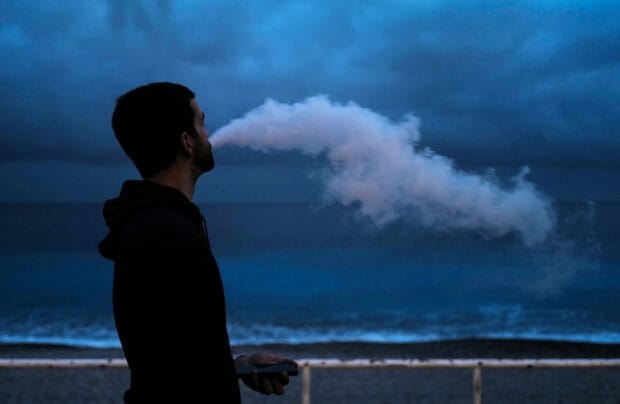 (FILES) In this file photo taken on February 3, 2022, a man smokes an e-cigarette as he walks along the “Promenade des anglais” on the French riviera city of Nice. (Photo by Valery HACHE / AFP)

MEXICO CITY — Mexico banned sales of electronic cigarettes and other vaping devices on Tuesday because of concerns about their health effects, the government announced.

President Andres Manuel Lopez Obrador said it was a “lie” to claim that e-cigarettes are a safe alternative to inhaling tobacco smoke.

“The vapors are also harmful for health,” added Lopez Obrador, who signed a decree introducing the ban on World No Tobacco Day.

He showed a pink vaping device to illustrate how the products are intended to appeal to young people.

“Look at the color, the design,” Lopez Obrador said.

Mexico City authorities meanwhile announced that smoking of any kind would be prohibited in the capital’s main square, the Zocalo, and surrounding areas in the busy historic district.

City Hall said the move was aimed at raising awareness of the health risks.

Smoking has been banned in closed spaces, government offices, shops, bars and restaurants for more than a decade, with exceptions for certain entertainment venues.

Mexico prohibited the import and export of vaping devices and cartridges in October, but companies have continued to sell their inventory, Deputy Health Minister Hugo Lopez-Gatell said.

The new ban covers “the circulation and marketing of these new products,” he added.

Congress is additionally expected to discuss an initiative to expand smoking bans to beaches, stadiums and open-air entertainment venues.

Smoking “is harmful to health and that has been proven. I think (the measure) is something good so that people don’t get sick,” said Alejandra Jimenez, a 25-year-old receptionist.

But Raphael, who sells tobacco-related products, said he was against the move.

“The ban is based on bad fundamentals, mainly because vaping is meant to stop or slow increased tobacco use in our country,” he said.

E-cigarettes heat a liquid typically containing nicotine and other chemicals into an aerosol. The user inhales the resulting vapor, mimicking traditional cigarettes.

Proponents of vaping say it is safer than traditional tobacco.

The World Health Organization considers electronic cigarettes to be harmful to health and has called for tight regulation to stop young people in particular from using them.

More than 30 countries have banned sales of electronic cigarettes, the WHO said last July.

In April, e-cigarette firm Juul agreed to pay $22.5 million in a US lawsuit that alleged the company deliberately targeted teenagers and lied about how addictive its products are.

WHO sounds alarm on ‘harmful’ e-cigarettes