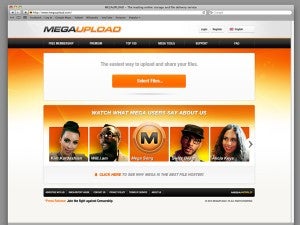 This undated image obtained by The Associated Press shows the homepage of the website Megaupload.com. Federal prosecutors in Virginia have shut down one of the world's largest file-sharing sites, Megaupload.com, and charged its founder and others with violating piracy laws. AP

WELLINGTON – A massive online piracy case against file-sharing website Megaupload was “flawed” and likely to be dismissed in a US court within a month, the site’s chief lawyer has said.

Rothken said Megaupload, whose founder Kim Dotcom was arrested in New Zealand as part of the probe along with three other executives, filed a motion this week in the US District Court calling for the case to be thrown out.

“We’re optimistic that the case against Megaupload will be dismissed,” he told Radio New Zealand in a telephone interview late Thursday, saying US law only allowed companies with a presence in the US to be indicted.

“Megaupload is a Hong Kong corporation, it does not have an office in the United States and we’re just asking the US to play by the rules,” he added.

The US indictment alleges Megaupload and related file-sharing sites netted more than $175 million and cost copyright owners more than $500 million by offering pirated copies of movies, TV shows and other content.

Dotcom and his co-accused, who were arrested when New Zealand police raided the Internet tycoon’s sprawling Auckland mansion on January 20, deny any wrongdoing and have vowed to fight the charges.

They are on bail as they await a court bid in August to extradite them to the United States.

Rothken said the US court action would determine the course of the Megaupload case and he expected a ruling within 30 days.

“This case was flawed from the start, once this case gets dismissed it can’t be fixed,” he said.

He accused the FBI and US Justice Department of not doing their homework when drawing up the indictment.

“It looks like they acted hastily, we’re going to let the court decide on the legal issues,” he said.

“One would think that they’d have done more legal research before filing this type of indictment against a foreign corporation.”