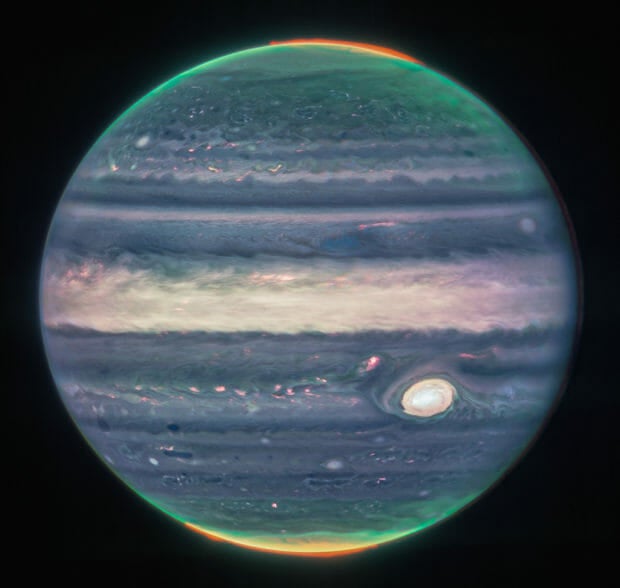 “We hadn’t really expected it to be this good, to be honest,” said planetary astronomer Imke de Pater of the University of California, Berkeley.

“It’s really remarkable that we can see details on Jupiter together with its rings, tiny satellites, and even galaxies in one image,” she said.

De Pater headed the observations of Jupiter, the largest planet in our solar system, with Thierry Fouchet of the Paris Observatory.

The composite images were taken with the observatory’s Near-Infrared Camera (NIRCam) and were artificially colored because infrared light is not visible to the human eye.

The auroras above the northern and southern poles of Jupiter have been mapped in redder colors while the Great Red Spot, a storm bigger than Earth, appears white.

One image shows Jupiter’s faint rings and its moons Amalthea and Adrastea.

Launched in December 2021 from French Guiana on an Ariane 5 rocket, Webb is orbiting the Sun at a distance of a million miles (1.6 million kilometers) from Earth, in a region of space called the second Lagrange point.

It took the spacecraft almost a month to reach the region, where it remains in a fixed position behind the Earth and Sun to give it a clear view of the cosmos.

The Webb telescope is an international collaboration between the US space agency NASA, the European Space Agency, and the Canadian Space Agency, involving more than 10,000 people.