SpaceX CEO Elon Musk shared an update about the Tesla Bot “Optimus.” He announced that his company’s android would debut on AI Day, September 30, 2022.

“Tesla Bots are initially positioned to replace people in repetitive, boring, and dangerous tasks. But the vision is for them to serve millions of households, such as cooking, mowing lawns, and caring for the elderly.”

The EV firm owner said that the robot would have human-like body parts. Also, it would have a similar weight, height, and movement as a regular person.

Expected features of the Tesla Bot 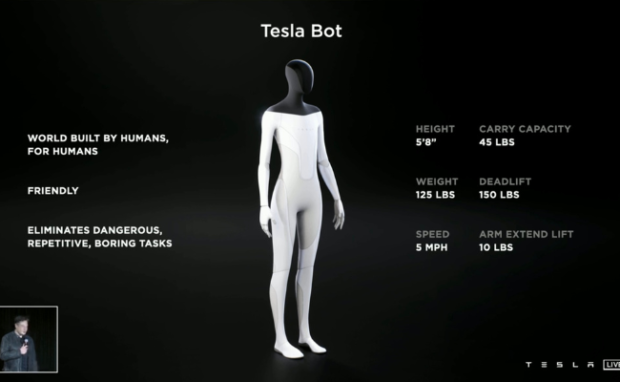 The Tesla Bot would weigh 125 lbs and stand five feet and eight inches tall. Also, it would pick up and carry objects and walk in small steps. The android would be able to “deadlift” 150 lbs, meaning it could carry that weight off the ground.

Its face will have a screen as an interactive interface for communicating with people. Moreover, Tesla’s Full Self-Driving computer will power the android.

It would also use the same interface found in current Tesla models. Musk said he intended the humanoid design so that the Tesla Bot would adapt to human society.

He explained, “…if we want a robot to adapt to its environment and be able to do what humans do, it has to be roughly the same size, shape, and capabilities as a human.”

He confirmed that he would focus on enhancing the Tesla Bot’s intelligence and solving the problem of large-scale production. As a result, Musk hopes the robot’s usefulness will improve as production scales up and costs go down.

Musk saw a future where his home robots would be cheaper than cars. He stated, “Perhaps in less than a decade, people will be able to buy a robot for their parents as a birthday gift.”

He first announced the Tesla Bot on last year’s AI Day and shared a few renderings. However, many people were worried that it resembled the NS5 robots from the 2004 sci-fi film “I, Robot.”

Musk allayed these fears by saying, “It’s intended to be friendly, of course.” He added that people could outrun and outpower the Optimus if they wanted.

Elon Musk said in AI Day 2021, “We should be worried about AI. What we’re trying to do here at Tesla is [to] make useful AI that people love and is … unequivocally good.”

Other companies have been using robots for various tasks. Nowadays, Amazon and Walmart use androids, and the former is currently testing its palm scanner for store checkout.