Can The Nothing Phone 1 Beat The iPhone? | Inquirer Technology

Should You Replace Your iPhone With Nothing (Phone)?

Buying smartphones can be boring since most of them look similar. The front is a black screen, and the back has the brand’s logo and the rear camera. Is there nothing else that the mobile phone market can offer?

Fortunately, the Nothing Phone 1 is here and may provide the variety you want. It sets itself apart because of its unique design and minimalistic software. Even better, you can purchase one now!

This article will tell you more about the Nothing Phone 1 and its fascinating features. Then, we will compare it with the current iPhone model to see if you should get one.

What are the features of the Nothing Phone 1? 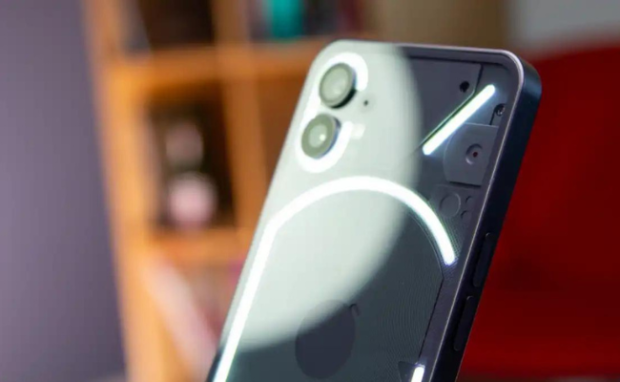 OnePlus co-founder Carl Pei founded the technology company Nothing on October 29, 2020. Its mission is to “remove barriers between people and technology.”

The Nothing company achieves this goal by designing products that are simple to use. As a result, its first smartphone has a unique design and an intuitive user interface.

Look at the Nothing Phone’s screen; it looks like any ordinary smartphone. You can see the lens of the front camera in the upper-left corner, but you will not notice more noteworthy features.

Check the back, and you will see how the Nothing Phone 1 stands out among competitors. You will see its LED strips in strange patterns, known as the Glyph interface.

The name comes from the word “hieroglyphs,” the ancient writing system found in Egyptian ruins. Yet, the Glyph interface can do more than catch the eye:

The lights quickly tell whether or not the alerts are worth checking. For example, if the glyph for emails appears, you do not need to open your phone until after an urgent meeting.

The Nothing Phone 1 has a built-in app that enables you to adjust glyphs’ colors, shapes, and brightness. The design may become a selling point or red flag, depending on your preferences.

If you want a smartphone that stands out among others, you may like the Glyph design. Otherwise, you might want to stick with ordinary designs like those from the iPhone 13. 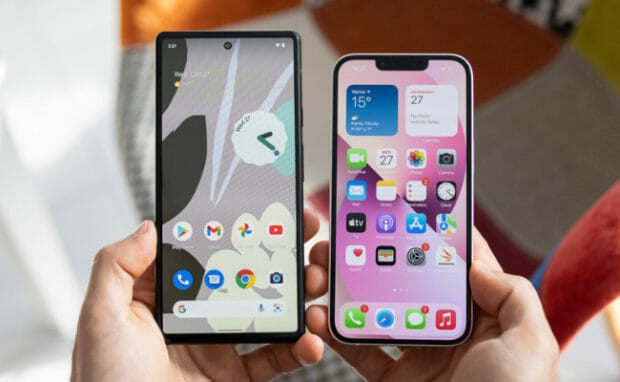 You and many other readers may not have heard of the Nothing Phone 1, so let us compare it with the latest model of the most popular smartphone. Will it hold up against the iPhone 13?

Test their processors, and you will see that the Nothing Phone 1 does not come close. It uses the Qualcomm Snapdragon 778G Plus that cannot keep up with the Apple A15 Bionic chip.

Yet, the Nothing Phone 1 may seem faster than the iPhone 13. The former has an adaptive refresh rate of up to 120Hz, while the latter only manages 90Hz.

You may prefer the iPhone 13 if you use it to create and edit professional videos. After all, you would need the extra RAM and refresh rate to render HD clips properly.

The rear cameras further enhance the Nothing Phone 1’s video recording capabilities. The pair consists of two 50MP cameras, and one of them is ultra-wide.

As mentioned, the camera glyphs work as a fill light, reducing shadows in photos. In other words, the rear cameras are powerful enough to provide high-quality images.

Most people typically do not use their phones for this reason, though. Meanwhile, the Nothing Phone 1 could be the better choice for daily use due to the following features: 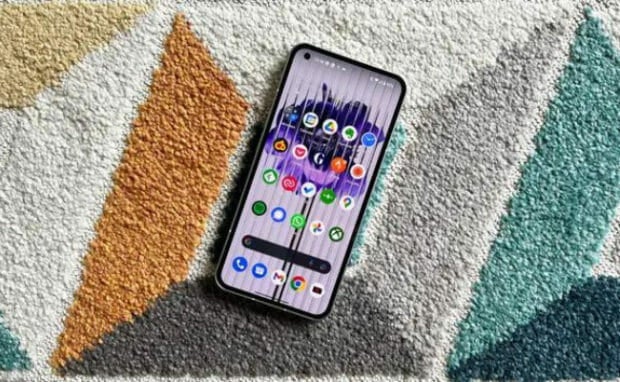 Do you know what turns people away from the iPhone 13? The screen’s upper notch can become distracting for most people because it takes space away from the apps.

The iPhone may need the screen real estate for its camera tech, but it can only take 12MP images. On the other hand, the minimalist Nothing Phone only has a dot for its 16 MP front camera.

You barely notice the front camera while you are chatting or watching Netflix. Then, it shows its quality when you need to take a selfie! 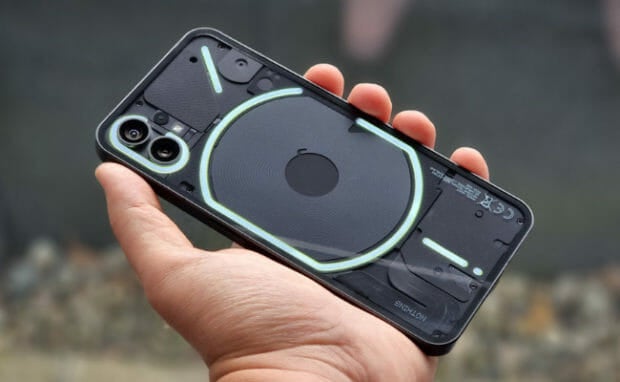 Another problem with the iPhone models is that they come with useless apps. For example, the Stocks app would not be relevant to anyone who does not have a portfolio.

You could easily remove them from the Home screen, but they are an eyesore. Meanwhile, the Nothing Phone 1’s intuitive design runs deep into its apps.

It comes with two Nothing apps: the camera and the recorder. Also, it has Google’s G Suite apps like Drive, Home, Photos, and Gmail.

As a result, the Nothing Phone 1 stays true to its vision of no-frills tech. You may add more apps from the Play Store app if you wish. 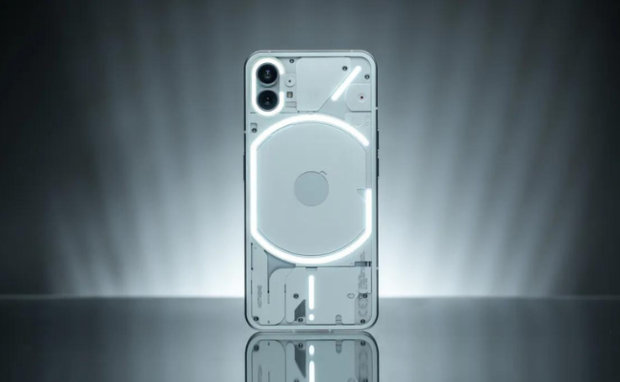 You may also rely on the Nothing Phone 1 to operate longer than the iPhone 13. Its battery capacity is 4,5000mAh, while the Apple device has 3,240mAh.

As a result, the Nothing Phone could last 14 hours on a single charge. On the other hand, the iPhone may last 12 to 13 hours. You could extend these periods if you only use your phone for casual purposes.

Moreover, it charges faster than the iPhone 13. Wired charging for the Nothing Phone 1 stands at 33W, while the iPhone only manages up to 7.5W

The Nothing Phone 1 does not come with a charger in its box. Yet, you may use any USB-C charger for it. Either purchase a new one or use your old charger.

Should you get the Nothing Phone 1? 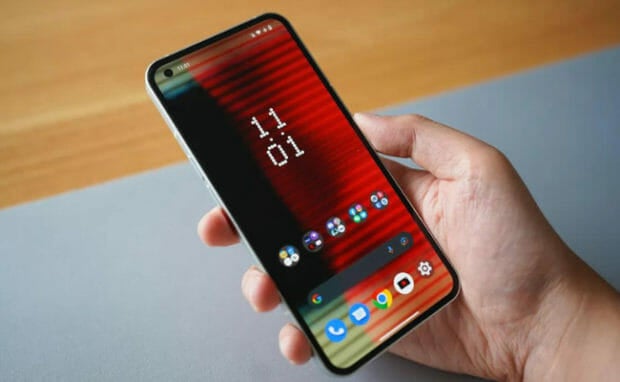 If you need a phone with a different aesthetic, you might like the Nothing Phone 1 and its glowing Glyph interface. It is similar to the designs common among gaming accessories.

You might not like the look if you need a phone for your workplace. Also, the Glyph interface has a glass coating that you might smudge and scratch over time.

Still, you may also appreciate that it contains a few built-in apps for a seamless user experience. You might also like it as an affordable alternative to the iPhone 13.

The Nothing Phone 1 plans a few surprises for its upgrades. For example, it may have an app that lets you open the doors of your Tesla car via a mobile app.

You will need to wait for that feature, but it may become worth it soon. The Nothing company is working on an update allowing its flagship phone to open and close Tesla vehicles.

You might consider purchasing the Nothing Phone if you already have a Tesla EV. Otherwise, you may buy one now to prepare for the release of the Tesla Cybertruck in 2023.

Take a look at the current features of the Nothing Phone 1. Find out if the following features are worth your budget:

If you want a unique smartphone, you might want to try the Nothing Phone 1. It has a unique look due to its Glyph interface and a minimal front camera.

Turn it on, and you will notice that it contains fewer built-in apps than others. As a result, the Nothing Phone 1 offers a seamless and simple user experience.

You may purchase it in countries outside the US, such as the Philippines. Otherwise, you might want to wait a few weeks for the iPhone 14, which may release on September 16, 2022.

What’s special about the Nothing Phone 1?

The Nothing Phone has a special Glyph interface that shows notifications via LED lights. Also, it contains few built-in apps so that users will not feel overwhelmed by too many tools.

Does the Nothing Phone 1 have wireless charging?

The Nothing Phone allows 15W wireless charging, but its box does not include a charger. Fortunately, it works with most USB-C and wireless chargers.

Is the Nothing Phone 1 worth buying?

You might like the Nothing Phone if you want a powerful yet simple phone for daily tasks. If you create and modify professional videos, you might want to choose the iPhone 13 instead.