Foldable iPhone Flip May Launch In 2024

Apple may release a foldable smart device two years from now. Analyst firm CCS Insight said on October 11, 2022, that it would start with a foldable iPad.

CCS Insight’s chief of research, Ben Wood, said that starting with a foldable iPhone would cause numerous issues for Apple. Yet, the company must follow the trend.

That is why launching an iPad variant is a safer choice. Meanwhile, tech insiders say Apple would release a foldable iPhone or the “iPhone Flip.” 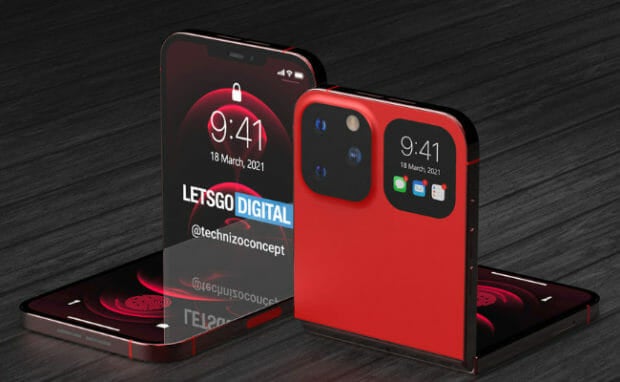 Samsung leads the foldable phone market with its Galaxy Z Fold lineup. That is why it makes sense for Apple to create something similar.

According to tech influencer Jon Prosser, the company tested two versions of the iPhone Flip. The first one looked like a fold-out hybrid tablet akin to the Z Fold.

The other was a clamshell design that resembled the Galaxy X Flip. In 2020, Apple patented a design called a “joint operating mode.”

It allows a single-screen device to have a magnetically-attached secondary display. However, applying this to the iPhone Flip would make it look more like the Microsoft Surface Duo 2.

Apple product blog PatentlyApple found an earlier patent from 2018. It describes a flexible display that clamps shut but leaves a small strip exposed at the bottom.

That part allows easy access to contextual information and notifications. In other words, it is like the Touch Bar from the MacBook Pro M2, but smaller.

Another one from the tech blog LetsGoDigital has a smaller notch and external cover display. Also, the YouTube channel ConceptsiPhone shared a version akin to the Galaxy Z Flip 3.

Designer Antonio De Rosa shared a design that looked like the Galaxy Z Flip. Moreover, it has Apple design touches like cameras that look similar to the iPhone 13 Pro.

CCS Insight reported that Apple may release a foldable iPad or iPhone in 2024. However, others have differing opinions regarding the release date.

Display analyst Ross Young said Apple might release the iPhone Flip next year. On the other hand, Apple insider Ming-Chi Kuo said the foldable phone may not arrive until 2025.

Follow Inquirer Tech to make sure you know when the iPhone Flip may come out. Also, it is a great source of news and updates about other gadgets and apps.