A flood of mature-rated content makes it difficult to search China protest news on Twitter, says a China-focused data analyst.

TechCrunch says the increase coincides with an unexpected wave of protests raging across major Chinese cities and universities.

Thread: Search for Beijing/Shanghai/other cities in Chinese on Twitter and you'll mostly see ads for escorts/porn/gambling, drowning out legitimate search results.
Data analysis in this thread suggests that there has been a *significant* uptick in these spam tweets. pic.twitter.com/Ao46g2ILzf

The country bans these networks, so the Chinese people use virtual private networks or VPNs. However, the drastic increase in bot content seems to coincide with the recent demonstrations.

As a result, spam tweets make it hard for citizens to follow protest news. Searching any major Chinese city on Twitter yields a cascade of explicit content, obscuring accurate information.

Data analyst Air-Moving Device added, “I looked at the number of tweets by each account over time.”

“Interestingly, more than 70% of these spam accounts only started tweeting like crazy recently. The rest (~top 90 in this plot) seem to have been spamming consistently for a while.”

The new Twitter CEO Elon Musk promised to crack down on bots and fake accounts, so he abruptly removed anti-propaganda staff.

The Washington Post reported on Sunday evening that Twitter “was aware” of the spam trend and “was working to resolve it.” 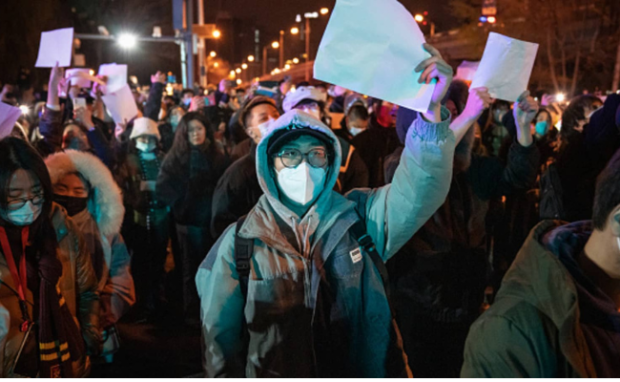 Public protest is a rarity in China, where the Communist Party strictly cracks down on dissent. That is why the recent demonstrations caught global attention.

Thousands of Chinese people took to the streets for the first time in decades, demanding freedom from the constant COVID tests and lockdowns.

According to CNN, they have been chanting “no to COVID tests, yes to freedom” and “Give me liberty or give me death!” across the country.

The recent outrage is a response to online videos that suggest China’s zero-COVID policy initially prevented emergency personnel from responding to a deadly fire in Xinjiang.

The blaze sparked in an apartment building in its capital city Urumqi and killed at least ten people.

Online clips showed Urumqi residents marching to a government building and demanding to end the lockdowns on November 25, 2022.

The next morning, the local government announced it would lift the lockdown in stages but did not specify a clear time frame.

CNN confirmed demonstrations in 16 areas in China, including its capital Beijing and its financial hub, Shanghai.

Others sang The Internationale, a socialist anthem previously sung in pro-democracy protests in Tiananmen Square in 1989.

Maria Repnikova, an associate professor at Georgia State University, said demonstrations in China rarely aim at the central government and its leader.

An unnamed Chengdu protestor told CNN, “It is so rare that we have such a large-scale gathering and demonstration.”

She added, “It turns out there are so many people who are wide awake. I feel like I can see a glimmer of light coming through ahead.”