San Francisco Police Can Use Robots To Kill Suspects

A recent law allows San Francisco Police to use robots for killing in extreme situations.

The department included this provision in a new “Law Enforcement Equipment Policy” that passed the city’s board of supervisors with an 8-3 vote.

As a result, the SFPD could arm robots with firearms. At the time of writing, it has 17 robots, but none of them are specifically for killing.

What could the San Francisco Police robots do? 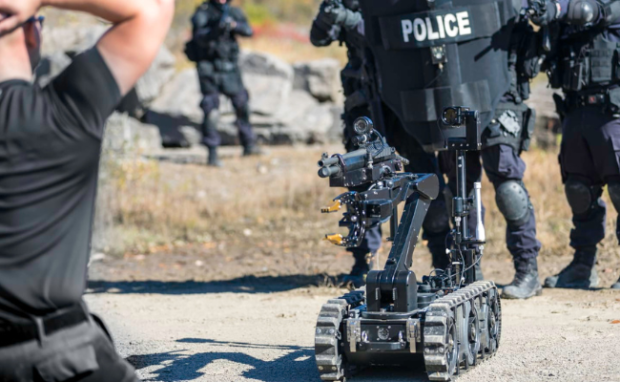 The SFPD filed the proposal in response to California Assembly Bill 481, which requires police to have a written inventory of military equipment.

They listed various guns, vehicles, and 17 robots. Only 12 fully function, and they are for detecting and disposing of bombs.

The recent amendment allows SFPD to use these robots to take lives to save others. That means the police may arm these robots with guns.

SFPD spokesperson Allison Maxie emphasized, “Robots equipped in this manner would only be used in extreme circumstances to save or prevent further loss of innocent lives.”

She added that San Francisco Police may arm them with explosives “to contact, incapacitate, or disorient violent, armed, or dangerous suspects.”

The public may see it as a surprising decision, but officers in the United States did something similar back then.

In July 2016, the Dallas Police Department killed a suspect using a robot with a bomb attached. TechCrunch said it could be the first time such an incident occurred in the US.

Police chief David Brown told the press, “We saw no other option but to use our bomb robot and place a device on its extension for it to detonate where the suspect was.”

Still, some people worry that the new law may allow the police to procure robots weaponized out of the box.

The Electronic Frontier Foundation compared the new rule with cell site simulators that police used to catch someone who stole $57 worth of food.

San Francisco Police may arm robots to kill suspects in extreme situations. Still, they operate the machines via remote control.

However, that might not be the case soon. Artificial intelligence has been rapidly improving over the years. Companies have been developing new ways to use it.

For example, Tesla is testing an update that enables its cars to recognize and follow traffic signs. These trends will change your life soon, so prepare by following Inquirer Tech updates.