Huawei offers two amazing holiday gifts: the Huawei Watch 3 and the Watch Buds. The cool thing is that the buds are inside the digital timepiece!

The announcement came out on Weibo as a teaser video. It featured a close-up of the Watch 3 around someone’s wrist.

The person twists the watch’s face to open it. Then, the Watch 3 reveals a compartment for the earbuds.

What we know about the new Huawei smartwatch 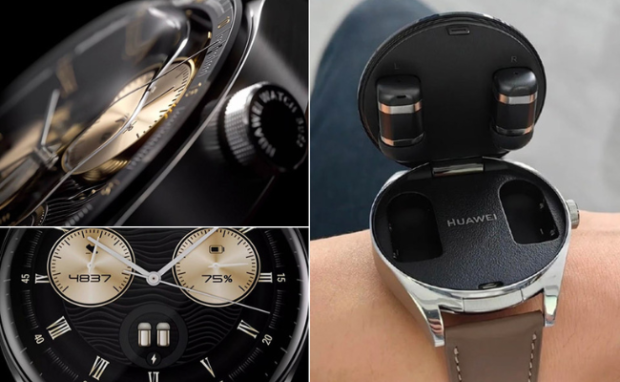 The Watch Buds attach to the bottom of the watch face. The YouTube video from QSQTechnology suggests magnets secure them in place.

The timepiece’s body reveals two slots for the wireless earphones. Moreover, the demo video seems to show Watch 3 charges the buds inside.

Some may see it as a minor feature, but it may come in handy for sporty users.

For example, joggers may bring the Huawei smartwatch instead of a separate timepiece and pair of earbuds.

Also, that might prevent users from frequently losing their earbuds, as The Watch 3 is a convenient and stylish carrying case.

However, Huawei has not revealed many details about the upcoming product.

It has not specified the specs of the Huawei Watch 3, such as battery life and operating system. Although, the demo video seems to show the watch running HarmonyOS.

The teaser video showed a December 2 release date, but Huawei has postponed its Winter 2022 consumer kit for unspecified reasons.

Some outlets speculated that it was a way to respect the passing of former CCP General Secretary Jiang Zemin on November 30.

It also affected announcements for other Chinese products. Unfortunately, the Huawei Watch 3 might be one of the gadgets only released in China.

For example, citizens may purchase Huawei’s budget foldable phone called the Huawei Pocket S, but it has no details for a worldwide launch.

The Huawei smartwatch is an interesting innovation, but others deserve your attention.

For example, did you know that Xiaomi is developing a smartphone that has a detachable full-size lens?

Sony will also release its new PSVR 2 headset in February next year. Check out these fantastic gadgets and other digital trends at Inquirer Tech.