Tesla delivers electric Semi trucks, hoping it will be a ‘game changer.’

Meanwhile, he said, “That thing looks like it came from the future.” Musk claims Tesla built the Semis to merge a cargo truck’s carrying capacity with a sporty sedan’s handling.

It would use electric motors that charge quickly and reduce carbon emissions. However, the carmaker has not specified a public release date and price.

How do Tesla Semi trucks work? 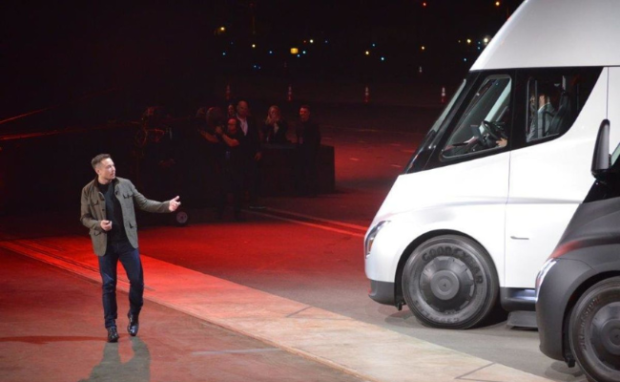 Elon Musk’s car company first showed a prototype of its cargo truck named the Semi in 2017. Back then, he said production would start two years later.

However, Tesla had to delay it, causing many people to wonder when the cargo vehicle would become available.

He discussed it during the product’s reveal at the factory. “The sheer amount of drama between five years ago and now is insane.”

“A lot has happened in the world. But here we are. It’s real.” Then, Musk promoted many features that make the Tesla Semi unique from other trucks.

He said it accelerates quicker than conventional diesel-powered carriers, even with a full load. Tesla’s video showed the Semi speeding up a steep incline and passing other trucks.

The Tesla vehicle can drive 500 miles on a single charge. It has three electric motors, but it mostly relies on a single one while driving.

The other two facilitate hard pulling and accelerating. Consequently, the truck can pull up to 82,000 pounds.

However, he and Musk did not mention how much time the truck needs to recharge. Additionally, the senior manager said the new vehicle uses regenerative braking.

Electric vehicles use this method to recharge their batteries while applying the brakes. As a result, the feature provides a safety benefit to the Semi truck has a separate set of brakes.

“You have all the power you need to get the job done,” Musk said, “This is a game changer.”

The first Tesla Semi truck might deliver your next can of Pepsi. Other companies have entered the EV market, such as Volvo, Rivian, and BYD.

Yet, “the market has been waiting for… is the one from Tesla,” said Dave Mullaney, a transportation specialist from sustainable energy firm RMI.

Hopefully, the Tesla Semi will have a global launch soon. In the meantime, follow Inquirer Tech for the best digital trends and updates.