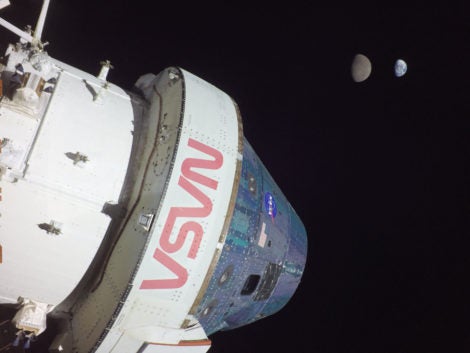 In this image released by NASA on November 28, 2022, flight day 13, the Orion spacecraft reached its maximum distance from Earth (R rear) during the Artemis I Moon (C rear) mission when it was 268,563 miles (432,210kms) away from our home planet. Orion has now traveled farther than any other spacecraft built for humans. (Photo by Handout / NASA / AFP)

Washington, United States — NASA’s Orion spaceship made a close pass of the Moon and used a gravity assist to whip itself back towards Earth on Monday, marking the start of the return journey for the Artemis-1 mission.

At its nearest point, the uncrewed capsule flew less than 80 miles (130 kilometers) from the surface, testing maneuvers that will be used during later Artemis missions that return humans to the rocky celestial body.

Communication with the capsule was interrupted for 30 minutes when it was behind the far side of the Moon – an area more cratered than the near side and first seen by humans during the Apollo era, although they didn’t land there.

The European Service Module, which powers the capsule, fired its main engine for over three minutes to put the gumdrop-shaped Orion on course for home.

“We couldn’t be more pleased about how the spacecraft is performing,” Debbie Korth, Orion Program deputy manager, said later.

As spectacular footage flashed on their screens once communication was restored, she told a news conference, “everybody in the room, we just kind of had to stop and pause, and just really look – Wow, we’re saying goodbye to the moon.”

Monday’s was the last major maneuver of the mission, which began when NASA’s mega Moon rocket SLS blasted off from Florida on November 16. From start to finish, the journey should last 25 and a half days. 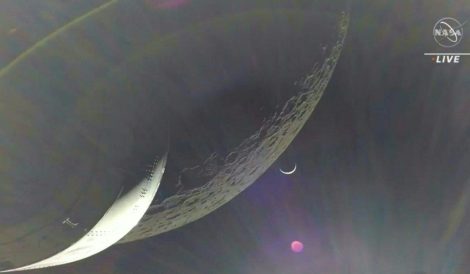 In this handout video grab courtesy of NASA TV the Earth is visible as a crescent in the minutes after Orion finished its engine burn around the moon on December 5, 2022. – NASA’s Orion spaceship made a close lunar flyby and used the Moon’s gravity to slingshot itself back towards Earth on Monday, marking the start of the return journey for the Artemis-1 mission. (Photo by Handout / NASA TV / AFP)

Orion will now make only slight course corrections until it splashes down in the Pacific Ocean off San Diego on Sunday, December 11, at 9:40 am local time (1740 GMT). It will then be recovered and hoisted aboard a US Navy ship.

Earlier in the mission, Orion spent about six days in “distant retrograde orbit” around the Moon, meaning at high altitude and traveling opposite the direction the Moon revolves around Earth.

A week ago, Orion broke the distance record for a habitable capsule, venturing 280,000 miles (450,000 kilometers) from our planet.

Once it returns to Earth, Orion will have traveled more than 1.4 million miles (2.25 million kilometers), said Mike Sarafin, the Artemis mission manager.

Re-entry into Earth’s atmosphere will present a harsh test for the spacecraft’s heat shield, which will need to withstand temperatures of around 5,000 degrees Fahrenheit (2,800degrees Celsius) – or about half the surface of the Sun.

Under the Artemis program – named for the sister of Apollo in Greek mythology – the United States is seeking to build a lasting presence on the Moon in preparation for an onward voyage to Mars.

Artemis 2 will involve a crewed journey to the Moon, once again without landing.

The first woman and next man are to land on the lunar south pole during Artemis 3, which is set for no sooner than 2025, though likely significantly later given timeline delays. 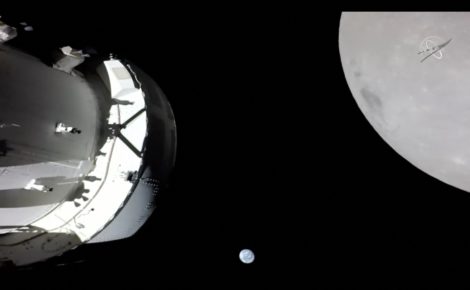 This handout image from NASA released on November 21, 2022, shows a view of the spacecraft, the Earth and the Moon captured by a camera on Orion’s solar array wing. – Orion was making its outbound powered flyby of the Moon as part of the Artemis I mission, approaching within 80 miles of the lunar surface. (Photo by Handout / NASA TV / AFP)