JIUQUAN, China — China launched its most ambitious space mission yet on Saturday, carrying its first female astronaut and two male colleagues in an attempt to dock with an orbiting module and work on board for more than a week. 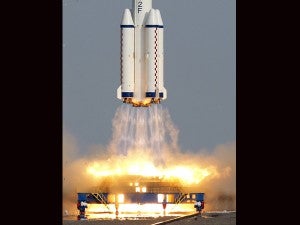 The Shenzhou 9 spacecraft rocket lifts off from the launch pad at the Jiuquan Satellite Launch Center in Jiuquan, China, Saturday, June 16, 2012. China sends its first woman and two other astronauts into space Saturday to work on a temporary space station for about a week, in a key step toward becoming only the third nation to set up a permanent base in orbit. AP PHOTO/NG HAN GUAN

The Shenzhou 9 capsule lifted off as scheduled at 6:37 p.m. (1037 GMT) from the Jiuquan Satellite Launch Center on the edge of the Gobi Desert. All systems functioned normally and, just over 10 minutes later, it opened its solar panels and entered orbit.

Female astronaut Liu Yang, 33, and two male crew members — mission commander and veteran astronaut Jing Haipeng, 45, and newcomer Liu Wang, 43 — are to dock the spacecraft with a prototype space lab launched last year in a key step toward building a permanent space station. All three are experienced pilots and officers in the Chinese air force.

Two of the astronauts will live and work inside the module to test its life-support systems while the third will remain in the capsule to deal with any unexpected emergencies.

China is hoping to join the United States and Russia as the only countries to send independently maintained space stations into orbit. It is already one of just three nations to have launched manned spacecraft on their own.

Another manned mission to the module is planned later this year, while possible future missions could include sending a man to the moon.

The space program is a source of enormous national pride for China, reflecting its rapid economic and technological progress and ambition to rank among the world’s leading nations. The selection of the first female astronaut is giving the program an additional publicity boost.

On a state visit in Denmark, President Hu Jintao congratulated everyone connected with the mission.

“I urge you to carry forward the spirit … and make new contributions to advance the development of our country’s manned space mission,” Hu said in a statement read to technicians at Jiuquan.

The astronauts are expected to reach the module, called Tiangong 1, on Monday. Now orbiting at 343 kilometers (213 miles) above Earth, the module is only a prototype, and plans call for it to be replaced by a larger permanent space station due for completion around 2020.

That station is to weigh about 60 tons, slightly smaller than NASA’s Skylab of the 1970s and about one-sixth the size of the 16-nation International Space Station.

China has only limited cooperation in space with other nations and its exclusion from the ISS, largely on objections from the United States, was one of the key spurs for it to pursue an independent space program 20 years ago.

China first launched a man into space in 2003 followed by a two-man mission in 2005 and a three-man trip in 2008 that featured the country’s first space walk.

In November 2011, the unmanned Shenzhou 8 successfully docked twice with Tiangong 1 by remote control.

Shenzhou 9 is to first dock with the module by remote control, then separate and dock again manually in order to fully test the reliability of the system. The astronauts are to conduct medical tests and various other experiments before returning to Earth after more than 10 days.