WASHINGTON  — After a decade of costly conflict in Iraq and Afghanistan, the American way of war is evolving toward less brawn, more guile. 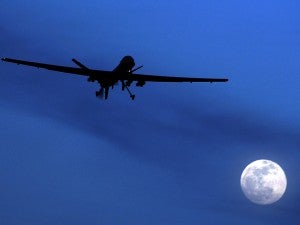 It’s war in the shadows, with the U.S. public largely in the dark.

In Pakistan, armed drones, not U.S. ground troops or B-52 bombers, are hunting down al-Qaida terrorists, and a CIA-run raid of Osama bin Laden’s hide-out was executed by a stealthy team of Navy SEALs.

In Yemen, drones and several dozen U.S. military advisers are trying to help the government tip the balance against an al-Qaida offshoot that harbors hopes of one day attacking the U.S. homeland.

In Somalia, the Horn of Africa country that has not had a fully functioning government since 1991, President Barack Obama secretly has authorized two drone strikes and two commando raids against terrorists.

In Iran, surveillance drones have kept an eye on nuclear activities while a computer attack reportedly has infected its nuclear enrichment facilities with a virus, possibly delaying the day when the U.S. or Israel might feel compelled to drop real bombs on Iran and risk a wider war in the Middle East.

The high-tech warfare allows Obama to target what the administration sees as the greatest threats to U.S. security, without the cost and liabilities of sending a swarm of ground troops to capture territory; some of them almost certainly would come home maimed or dead.

But it also raises questions about accountability and the implications for international norms regarding the use of force outside of traditional armed conflict. The White House took an incremental step Friday toward greater openness about the basic dimensions of its shadowy wars by telling Congress for the first time that the U.S. military has been launching lethal attacks on terrorist targets in Somalia and Yemen. It did not mention drones, and its admission did not apply to CIA operations.

“Congressional oversight of these operations appears to be cursory and insufficient,” said Steven Aftergood, an expert on government secrecy issues for the Federation of American Scientists, a private group.

“It is Congress’ responsibility to declare war under the Constitution, but instead it appears to have adopted a largely passive role while the executive takes the initiative in war fighting,” Aftergood said in an interview.

That’s partly because lawmakers relinquished their authority by passing a law just after the Sept. 11 terrorist attacks that essentially granted the White House open-ended authority for armed action against al-Qaida.

Secret wars are not new.

For decades, the CIA has carried out covert operations abroad at the president’s direction and with congressional notice. It armed the mujahedeen in Afghanistan who fought Soviet occupiers in the 1980s, for example. In recent years the U.S. military’s secretive commando units have operated more widely, even in countries where the U.S. is not at war, and that’s blurred the lines between the intelligence and military spheres.

In this shroud of secrecy, leaks to the news media of classified details about certain covert operations have led to charges that the White House orchestrated the revelations to bolster Obama’s national security credentials and thereby improve his re-election chances. The White House has denied the accusations.

Two U.S. attorneys are heading separate FBI investigations into leaks of national security information, and Congress is conducting its own probe.

It’s not just the news media that has pressed the administration for information about its shadowy wars.

Some in Congress, particularly those lawmakers most skeptical of the need for U.S. foreign interventions, are objecting to the administration’s drone wars. They are demanding a fuller explanation of how, for example, drone strikes are authorized and executed in cases in which the identity of the targeted terrorist is not confirmed.

“Our drone campaigns already have virtually no transparency, accountability or oversight,” Dennis Kucinich, a Democratic congressman, and 25 other mostly anti-war members of Congress wrote Obama on Tuesday.

A few dozen lawmakers are briefed on the CIA’s covert action and clandestine military activity, and some may ask to review drone strike video and be granted access to after-action reports on strikes and other clandestine actions. But until two months ago, the administration had not formally confirmed in public its use of armed drones.

In an April speech in Washington, Obama’s counterterrorism chief, John Brennan, acknowledged that despite presidential assurances of a judicious use of force against terrorists, some still question the legality of drone strikes.

“So let me say it as simply as I can: Yes, in full accordance with the law — and in order to prevent terrorist attacks on the United States and to save American lives — the United States government conducts targeted strikes against specific al-Qaida terrorists, sometimes using remotely piloted aircraft, often referred to publicly as drones,” he said.

President George W. Bush authorized drone strikes in Pakistan and elsewhere, but Obama has vastly increased the numbers. According to Bill Roggio of The Long War Journal, an online publication that tracks U.S. counterterrorism operations, the U.S. under Obama has carried out an estimated 254 drone strikes in Pakistan alone. That compares with 47 strikes during the Bush administration.

In at least one case the target was an American. Anwar al-Awlaki, an al-Qaida leader, was killed in a U.S. drone strike in Yemen in September.

According to a White House list released late last year, U.S. counterterrorism operations have removed more than 30 terrorist leaders around the globe. They include al-Qaida in East Africa “planner” Saleh Ali Saleh Nabhan, who was killed in a helicopter strike in Somalia.

A Pew Research Center survey on the U.S. image abroad found that in 17 of 21 countries surveyed, more than half of the people disapproved of U.S. drone attacks targeting extremist leaders in such places as Pakistan, Yemen and Somalia. In the U.S., 62 percent approved of the drone campaign, making American public opinion the clear exception.

The U.S. use of cyberweapons, like viruses that sabotage computer networks or other high-tech tools that can invade computers and steal data, is even more closely shielded by official secrecy and, arguably, less well understood.

John McCain, a Republican senator, has been a leading critic of the administration’s handling of information about using computers as a tool of war.

“I think that cyberattacks are one of the greatest threats that we face,” McCain said in a recent interview, “and we have a very divided and not very well-informed Congress addressing it.”

Defense Secretary Leon Panetta and national security officials often talk publicly about improving U.S. defenses against cyberattack, not only on U.S. government computer systems but also against defense contractors and other private networks linked, for example, to the U.S. financial system or electrical grid. Left largely unexplained is the U.S. capacity to use computer viruses and other cyberweapons against foreign targets.

In the view of some, the White House has cut Congress out of the loop, even in the realm of overt warfare.

James Webb, a Democratic senator, who saw combat in Vietnam as a Marine, introduced legislation last month that would require that the president seek congressional approval before committing U.S. forces in civil conflicts, such as last year’s armed intervention in Libya, in which there is no imminent security threat to the U.S.

“Year by year, skirmish by skirmish, the role of the Congress in determining where the U.S. military would operate, and when the awesome power of our weapon systems would be unleashed has diminished,” Webb said.