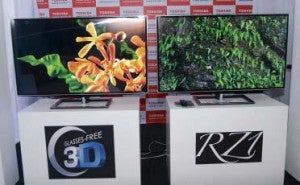 During the launch event in Taguig City, the company also introduced its new brand ambassador for the Philippines, model and actress Solenn Heussaff.

In its new line-up of state-of-the-art TVs, Toshiba unveils what it described as the “breakthrough” 55-inch Regza RZ1—the first large-screen glasses-free 3D TV to be launched in the Philippines.

Equipped with a quad full HD screen, the Regza RZ1 provides viewers with an immersive 3D TV experience and can also deliver 2D content with four times the resolution of the full HD format.

Toshiba also introduces the latest advances in its Power TV series, which is a line-up of light emitting diode (LED) TVs that make full use of Toshiba’s new Regza engine to provide outstanding picture and sound quality.

Weighing only 1.12kg, the Portégé Z930 is billed as the world’s lightest 13.3-inch Ultrabook that combines the ease of use and performance of a laptop with the “wake-up responsiveness” of a tablet.

Only 15.9mm high, Toshiba’s new Ultrabook features a slim design with a durable magnesium alloy chassis; a battery life of up to eight hours; and all the power and fast, easy connectivity of a comprehensive selection of full-sized ports.

Powered by the latest generation of processors and with state-of-the-art, high-speed data interfaces, all laptops in the Satellite series excel in fulfilling the most demanding business needs, the company says.

“We at Toshiba are constantly innovating and exploring new technologies that allow us to provide consumers with stylish and functional products,” Toshiba Philippines president and CEO Tomoyasu Yamamoto states. “In addition, by enhancing awareness of our brand, we hope more consumers will make Toshiba their choice.”

The company also announced on Sunday that its local marketing efforts would be aided by its new brand ambassador, Solenn Heussaff.

“As the official brand ambassador for Toshiba in the Philippines, she will be featured in Toshiba advertisements for notebook PCs, TVs, and home appliances in the major media,” the company says in a statement.

“Toshiba chose her as its new brand ambassador because her alluring combination of a fresh image and sophisticated character reflects qualities that Toshiba brings to its products—providing a close-to-the-heart appeal for the Philippine consumers,” it adds. “Her undeniable style and real talent is the perfect match for Toshiba’s innovative and technologically advanced products.”