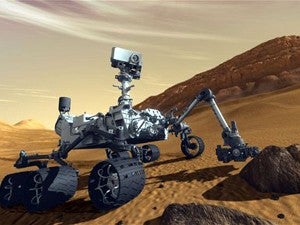 No cookie cutter, he. The size of a Mini Cooper and nicknamed Curiosity, the rover is a souped-up version of the golf cart-size twin rovers Spirit and Opportunity. Essentially a science laboratory on wheels, Curiosity carries a suite of tools to analyze Martian rocks and soil to determine whether environmental conditions can support primitive life. AP

LOS ANGELES — NASA’s next-generation rover to the surface of Mars, which is already over budget and behind schedule, faces significant hurdles as it races to the launch pad for a November lift-off, said an internal audit released on Thursday.

The space agency insisted the remaining work to be done will not result in yet another launch slip.

“At this point in time, we are fully on schedule,” said Dave Lavery, the project’s program executive at NASA headquarters.

The mobile Mars Science Laboratory is intended to be the most sophisticated rover sent to the Martian surface. From the outset, the mission managed by NASA’s Jet Propulsion Laboratory has been plagued by development woes that have put it behind schedule and driven up costs. The total cost of the mission has ballooned to $2.5 billion from $1.6 billion.

NASA’s inspector general faulted project managers for routinely underestimating costs, and calculated that an extra $44 million to the development budget may be needed to avoid another delay or cancellation.

The latest price tag “may be insufficient to ensure timely completion of the project in light of the historical pattern of cost increases, and the amount of work that remains to be completed,” the report said.

The size of a Mini Cooper and nicknamed Curiosity, the rover is a souped-up version of the golf cart-size twin rovers Spirit and Opportunity. Essentially a science laboratory on wheels, Curiosity carries a suite of tools to analyze Martian rocks and soil to determine whether environmental conditions can support primitive life.

Curiosity was supposed to fly in 2009, but problems during construction forced NASA to push back launch by two years to 2011, when the orbits of Mars and Earth are again closely aligned.

Engineers had to redesign the heat shield after it failed safety tests. There were delays in shipping instruments to NASA. It took longer than expected to build and test the gear boxes that enable the mega-rover to drive and flick its robotic wrist.

Auditors found 1,200 reports of problems and failures that have not been resolved, as of February. Since then, only about 1,000 issues remained. Though the number was a bit on the high side, it was not out of the character for such a complicated mission, Lavery said.

While engineers have fixed most of the problems that delayed the launch, some key issues lingered, including potential contamination of rock and soil samples by the spacecraft’s robotic arm. NASA has since found a solution to minimize contamination, but auditors said they remained concerned that the fix would not be completed in time for Curiosity’s departure later this month from California to Florida to be prepped for launch.

Another launch delay would increase costs by at least another $570 million, the report said.

NASA has maintained that Curiosity is no cookie-cutter rover and that unforeseen problems are to be expected when building such a complex machine.

Unlike the previous Mars rovers that bounced to a landing cocooned in air bags, the nuclear-powered Curiosity will use a precision landing system to gently lower itself to the surface — a tough engineering feat. Curiosity’s landing site has yet to be chosen from among four finalists.

One thing Curiosity won’t be able to do is take pretty pictures of its surroundings with a high-resolution 3-D camera. NASA recently nixed the camera that “Avatar” director James Cameron was helping to design because there wasn’t enough time to test it before launch.

Instead, the rover’s “eyes” will be digital color cameras that are three times more powerful than those aboard previous Martian surface spacecraft.

Planetary scientist Ronald Greeley of Arizona State University, who chairs a group that advises NASA, said he was encouraged that the space agency was taking the concerns seriously and remained cautiously optimistic that Curiosity will launch this year.

“Everything that is reasonable is being done,” he said. “That doesn’t mean bad things can’t happen.”