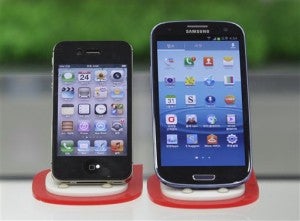 Samsung Electronics’ Galaxy S III, right, and Apple’s iPhone 4S are displayed at a mobile phone shop in Seoul, South Korea, Friday, Aug. 24, 2012. South Korea’s Samsung won a home court ruling in its global smartphone battle against Apple on Friday when Seoul judges said the company didn’t copy the look and feel of the U.S. company’s iPhone, and that Apple infringed on Samsung’s wireless technology. However, in a split decision on patents, the panel also said Samsung violated Apple technology behind the bounce-back feature when scrolling on touch screens, and ordered both sides to pay limited damages. AP/Ahn Young-joon

MANILA, Philippines—The Philippines remained the fastest-growing market for smartphones in Southeast Asia, with the number of devices jumping more than four-fold as of July from the same period last year.

Singapore-based research firm GfK in a report released Monday showed that one in four mobile devices sold in the Philippines as of July was a smartphone.

“(The Philippines was) also the country with the highest jump in smartphone market share within a year, from 9 to 24 percent,” the report said.

The sales growth in the country was significantly higher than the 78-percent growth recorded in Southeast Asia’s seven major markets, namely the Philippines, Singapore, Malaysia, Thailand, Indonesia, Vietnam and Cambodia.

Total mobile-phone sales, which include low-priced “feature phones,” grew in the seven countries by 24 percent year on year as of July.

While more feature phones were sold in the region, GfK said more money was spent on smartphones. Of the total $13.7 billion spent on new phones in the seven-month period, $8.75 billion went to smartphones.

GfK said the smartphone growth in the region was driven primarily by the entry of more affordable devices worth $100 to $200 each, which are now dominating the market.

“With major manufacturers recently announcing their intentions to launch low-end smartphones priced below $100, the device will be within the reach of an even larger pool of consumers and the market is expected to grow even faster when these models are made widely available,” Tan said.

“This move is likely to significantly expedite the demand surge for smartphones in the region’s yet to be converted feature phone user population, which we expect to see continued robust growth for at least the next two years,” he said.

In a previous report, GfK said the relatively low penetration of smartphones in the Philippines was a major factor behind the high growth rates.

The region’s most mature markets are Malaysia and Singapore, where penetration rates are at 90 percent.

In markets like the Philippines, three-quarters of phones sold are still feature phones, which are mainly used to call and send text messages.

The country’s top telcos Globe Telecom, Smart Communications and sister Sun Cellular have all started to bundle smartphone models with their affordable post-paid plans in a bid to make it easier for consumers to decide to switch phones.