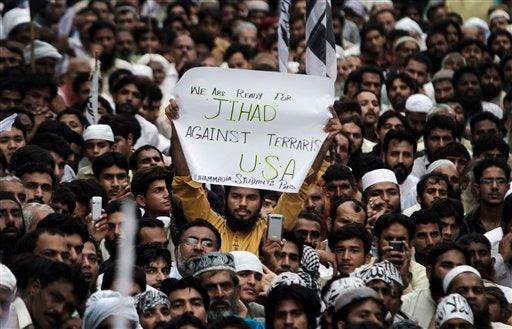 Thousands of supporters of the Pakistani religious group Jammat-Ud-Dawa Tehreek-e-Insaf or Movement for Justice take part in a demonstration in Lahore, Pakistan, as part of widespread anger across the Muslim world about a film ridiculing Islam’s Prophet Muhammad. AP

ISLAMABAD—Pakistan blocked access to YouTube on Monday after the video sharing website failed to take down an anti-Islam film that has sparked furious protests across the Muslim world.

Attempts to access YouTube met with a message saying the website had been classed as containing “indecent material” and was blocked on the orders of the Pakistan Telecom Authority.

The ban was ordered by Prime Minister Raja Pervez Ashraf “after YouTube refused to heed to the advice of the government of Pakistan to remove blasphemous film from its site”, a statement from his office said.

The movie entitled “Innocence of Muslims”, believed to have been produced by a small group of extremist Christians, has sparked a week of furious protests outside US embassies and other American symbols in at least 20 countries.

Two protesters died in Pakistan on Monday — one in an exchange of gunfire in the country’s restive northwest and one who succumbed to his injuries after being shot in the head during a demonstration in Karachi on Sunday.