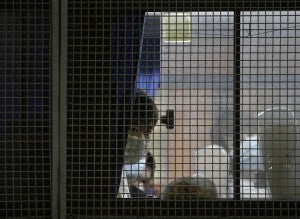 A Taiwanese suspected of being a member of an online fraud syndicate looks out from the window of a Philippine National Police bus as they arrive at Manila’s International Airport, Philippines early Wednesday Sept. 19, 2012, before being deported with 278 others. The new Cybercrime Prevention Act of 2012 allows authorities to conduct surveillance and tap into an individual’s conversations if another believes that that person has committed a crime or is about to commit one, according to a lawyer Al Vitangcol. AP PHOTO/AARON FAVILA

MANILA, Philippines—If you feel like someone else is recording your conversation over Skype with a loved one who is based abroad, chances are, you are right.

This is because the Cybercrime Prevention Act of 2012, which was recently signed into law, allows authorities to conduct surveillance and tap into an individual’s conversations if another believes that that person has committed a crime or is about to commit one, according to a lawyer.

“There’s a complaint against you, and a court warrant was secured. Then NBI [National Bureau of Investigation] and PNP [Philippine National Police] authorities can tap your online access…Your e-mail (exchanges) they can monitor, your conversations…They are allowed to do that (under this law),” said Al Vitangcol, also one of the directors of the Philippine Computer Society, an organization of information technology professionals, at the Fernandina forum in San Juan city on Wednesday.

He said that this power provided by the law, then, can be “exploited” by several parties.

“What if I just don’t like you, and I just want to (secure a copy) of your conversations (with someone else)?” Vitangcol asked.

Aside from this, the lawyer said that the new legislation was “in conflict with” the anti-wiretapping law, which prohibits the recording and interception of private conversations.

He added that some of the provisions of the new law were “overreaching.”

He cited as an example Section 2 of the Definition of Terms, which says that the law will apply to “all types of computer-related equipment including but not limited to computers and mobile phones.”

“With that phrase…that means any device and equipment that is electronic in nature can be covered by the law. In that case, even the ordinary things that we use that are really not included (as intended by the law) are included …because of that overreaching phrase…,” he explained.

He cited as another example, Section 6, which states that all crimes “defined and penalized by the Revised Penal Code, if committed through and with the use of information and communications technologies,” shall also be covered by the provisions of the new legislation.

The new law dictates that the penalties meted against the person who committed these offenses would be “one degree higher,” Vitangcol said.

“Let’s say I hit someone, that’s slight physical injuries. But what if I’m in front of a computer? Instead of punching the person, I hit him with a keyboard. The (good lawyer might use this law against me and say that my penalty should be one degree higher). This particular provision is vague. It just says all crimes…nothing specific,” he explained.

Former Senator Francisco Tatad, for his part, said that the act should have been discussed in public hearings first before it was signed into law.