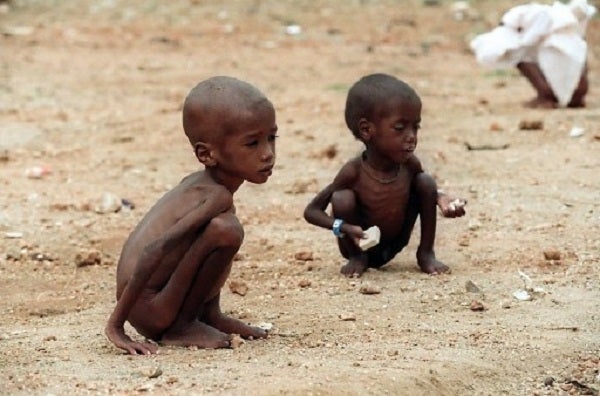 Two little boys suffering from starvation wait for food supplies in Baidoa, south-east of Somalia. War in Somalia has left thousands of civilians hungry, mostly women and children. In the decade since civil war prompted the fall of Somali president Siad Barre in January 1991, the country has been ravaged not only by more factional fighting, but also by famine and the total collapse of central state infrastructure. AFP FILE PHOTO/ALEXANDER JOE

WASHINGTON—A shift to digital payments can improve the global effort to fight poverty and improve conditions for those trapped in a cycle dependent on cash, say backers of a new initiative launched Wednesday.

The “Better than Cash Alliance” unveiled Wednesday has been endorsed by the United Nations, US government and a number of non-government organizations as a way to improve efficiency and help the world’s poor better manage resources.

They called on governments, the development community and the private sector to adopt electronic payments for programs that support people living in poverty.

This effort is already underway with the governments of Peru, Kenya, Colombia, and the Philippines, along with development organizations, the alliance said.

“We know that electronic payments can empower people and help include them in economic life,” said Christine Roth, deputy executive secretary of the UNCDF, which serves as the secretariat for the alliance.

“Yet, while there are many benefits in shifting away from cash, the effort requires leadership, resources and technical expertise. By offering these services to governments, private sector and development community organizations, we believe we can accelerate the shift to electronic payments.”

A report commissioned by the alliance and released by consultancy Bankable Frontier Associates concluded that the cash-only economy can prevent people from breaking the cycle of poverty.

Today, some 2.6 billion people live on less than $2 per day and 90 percent of them lack access to formal financial services, according to the alliance.

“We’ve all heard the adage ‘cash is king,’ but for too many women and men in the world, living in a cash-reliant world is a tremendous burden,” said David Porteous, the lead researcher behind the BFA study.

“Cash-only economies often make it too difficult to find a path out of poverty — it means it is hard to build up savings, cash offers too many opportunities for corruption, and women are often at risk when they have to carry their life savings in cash or gold rather than in an electronic account.”

Founding members of the Alliance will host a global leaders forum coinciding with the United Nations General Assembly and Clinton Global Initiative on September 24 in New York.