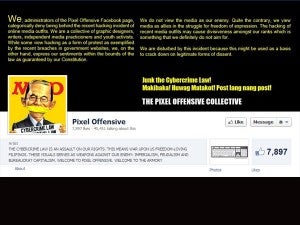 MANILA, Philippines – An anti-Cybercrime Law group denied Friday that it hacked into a local news website by redirecting users to its Facebook page.

“We, administrators of the Pixel Offensive Facebook page, categorically deny being behind the recent hacking incident of online media outfits,” the group said in a statement, saying that while hacking of government websites has been recently viewed as a form of protest, they stay within the bounds of the law in expressing their sentiments.

Reports said that users who are trying to access the news website of the Manila Bulletin (www.mb.com.ph) is being redirected to the facebook fan page of “Pixel Offensive” (http://www.facebook.com/PixelOffensive), which has openly expressed its opposition on the recently approved Republic Act 10175, or the Cybercrime Law Prevention Act of 2012.

“We do not view the media as our enemy. Quite the contrary, we view media as allies in the struggle for freedom of expression,” the statement read, adding that the incident may lead to dissension amongst their ranks.

For their part, Renato Reyes, Bagong Alyansang Makabayan secretary general, said he thought this incident was made to frame up a critic of the cybercrime law, considering that previous hack jobs concentrated only on government websites.

“[This] is the first time a media site was hacked . . .  divide and rule tactics  vs cybercrime? . . . is [the] government getting desperate?” Reyes said in a text message.

Bayan-National Capital Region spokesman Paolo Quiza, on the other hand, said this event disturbed them for this may be the government’s move to criminalize visual artists.

He said, however, that their group was not against hacking as a form of protest. “In fact, we encourage all our citizens to air out their protests against Cybercrime Law in any form and fronts they would want to, whether online or offline.” Quiza added.

TOPICS: Cybercrime law, Facebook, hacking, infotech, Internet, Manila Bulletin, Pixel Offensive, protest
Read Next
Belmonte against amending cybercrime law for now
EDITORS' PICK
Current dominant strain of COVID-19 more infectious than original—study
Smart releases Hyun Bin’s second TVC
EuroMillions Superdraw: A lottery draw unlike any other is coming to the Philippines
‘Justice will be done,’ Duterte assures as he vowed probe on Jolo incident to bare ‘truth’
Water remains our saving grace right now
DOLE: Return of OFWs’ remains from Saudi to be ‘delayed,’ deadline moved to ‘early next week’
MOST READ
Duterte tells military: No other president looked at you the way I did
Locsin warns of ‘severest response’ if China’s army drills in SCS ‘spill over’ to PH domain
BREAKING: Duterte signs anti-terror bill into law
Vico: Cleanup of bidding process saved Pasig gov’t P415M
Don't miss out on the latest news and information.