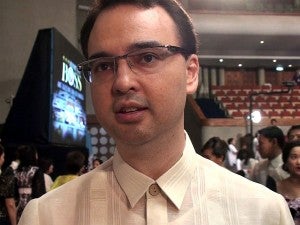 MANILA, Philippines—Senate Minority Leader Alan Peter Cayetano is proposing “real-time tweeting” in the Senate to allow public participation in all issues being tackled in the chamber.

This way, Cayetano said, the public will not be caught unaware of the issues being discussed in the chamber just like what is happening now with the controversial cybercrime law.

The measure was passed in Congress last June but it generated public attention only after it was signed into law by President Benigno Aquino III last month.

“I have two proposals. First, for the Senate Secretariat to have real-time tweeting. Meaning, while we are discussing, they can tweet their proposed amendments so everyone – even those in Luzon, Visayas and Mindanao and our OFWs, can see what is happening in the Senate and immediately react to it,” Cayetano said in Tagalog on Friday.

“Live streaming is good but how can you react?” he said.

At present, the public may watch floor deliberations in the Senate through live streaming.

Cayetano’s second proposal was to have a memorandum of agreement between the private sector and the Senate and the House of Representatives.

In the agreement, he said, the private sector should be given advanced copy of the bills that will be tackled in Congress so they can immediately see the defects or problems of the proposed legislation.

“We should move towards empowering the people and the democracy in passing our laws. And I think Facebook, Twitter, and of course, the traditional media would play a great part,” he said.