Big Bird going way of the dodo if Romney wins 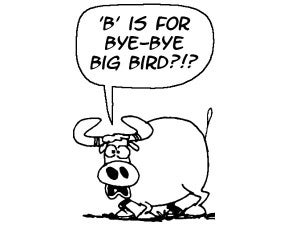 No sooner had Mitt Romney asked Big Bird to step aside during a verbal sparring match with US President Barack Obama than the giant yellow muppet on the well-loved children’s television show “Sesame Street” became a top-trending topic on social media sites.

The former Massachusetts governor running for US president definitely angered “the people in the neighborhood” who grew up on the long-running educational series after he threatened to pull the plug on America’s public television service and, by extension, its beloved “Sesame Street” character Big Bird.

In a statement, the Public Broadcasting Service (PBS)—a nonprofit American public broadcasting television network which airs such programs as “Downton Abbey” and “Sesame Street” without commercials—said it was “very disappointed” by Romney’s threat made during his first debate with Obama.

“Governor Romney does not understand the value the American people place on public broadcasting and the outstanding return on investment the system delivers to our nation,” it said.

Romney turned on PBS—whose veteran news anchor Jim Lehrer moderated Wednesday’s debate—as he spelled out how he intended to slash the US government’s trillion-dollar deficit.

“I like PBS. I love Big Bird,” said Romney, name-checking the leggy yellow character who teaches children the alphabet on “Sesame Street.” “But I’m sorry, Jim. I’m gonna stop the subsidy to PBS.”

PBS said the “federal investment” in public broadcasting equals only “about one one-hundredth of one percent of the federal budget.”

Romney’s reference to Big Bird triggered a torrent of sarcastic remarks on Twitter, while a meme of the much-loved character—sitting on a brownstone stoop with a “Will work for food” sign—went viral on the Internet.

Read other “Big Bird” sentiments: “Today is brought to you by the letter U for Unemployed.” “Screw Romney… I wasn’t going to vote for him anyway.” “I thought people who acted like you lived in trash cans, not mansions.”

“Hey Mitt Romney, today’s Sesame Street is brought to you by the letters L I A & R,” said a Big Bird parody account.

Blogger Kelly Jensen added: “In all seriousness, Big Bird got more attention than women did in this debate.”

Tweeted another user: “Children around the world traumatized about Romney promising to kill Big Bird.”

Actor-director Albert Brooks wrote: “Next debate will be moderated by Miss Piggy before she loses her job…”

At one point during Wednesday’s debate, Twitter said, Big Bird’s name was being tweeted at a rate of 17,000 times a minute. It was still among the top-trending words 17 hours after the debate ended.

Speaking in Denver, Colorado, in the aftermath of the debate, Obama poked fun at his opponent, even though most commentators declared Romney the winner of the debate.

“Thank goodness somebody is finally getting tough on Big Bird,” the president said to laughter and applause. “It’s about time. We didn’t know that Big Bird was driving the federal deficit.”

It gave no dollar figure, but according to other sources, PBS received $445.5 million from Washington this year. That compares to $20 billion in subsidies to US farmers and $707.5 billion for the US military.

“Elimination of funding would have virtually no impact on the nation’s debt, yet the loss to the American public would be devastating,” the broadcaster said.

PBS and its member stations, like their public radio counterparts, also get revenue from tax-deductible contributions from viewers, collected during frequent on-air fundraising drives.

While fans applaud its higher brow commercial-free content, some of which is imported from British sources like the BBC, hard-core conservatives regard public broadcasting as a Trojan horse for liberal values.

“Sesame Street,” produced by the nonprofit Sesame Workshop for PBS, has been on the air for more than 40 years, and offshoots appear on television in more than 150 countries.

“Sesame Workshop is a nonpartisan, nonprofit, educational organization,” it said in a brief statement. “We do not comment on (political) campaigns—but we’re happy we can all agree that everyone likes Big Bird.”