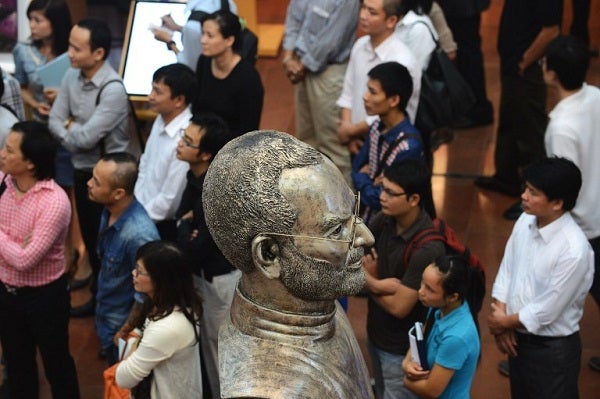 A bust of Steve Jobs looms over visitors at the opening ceremony of at an art exhibition in commemoration of the late Apple’s co-founder Steve Jobs on the occasion of his first death anniversary in Hanoi on October 5, 2012. The art exhibition entitled “Think Different” was ininiative of a group of local artists and sponsored by the US embassy and Vietnam’s National Library. AFP PHOTO/HOANG DINH Nam

SAN FRANCISCO – Apple paid tribute Friday to Steve Jobs a year after his death, with a video and homage to the man who co-founded and propelled the iconic technology firm into the world’s biggest company.

“Steve’s passing one year ago was a sad and difficult time for all of us,” Jobs’s successor as chief executive, Tim Cook, said in a message on the company website.

“I hope that today everyone will reflect on his extraordinary life and the many ways he made the world a better place.”

Apple posted a two-minute video with snippets of Jobs and the various products he introduced, from the early Apple computers to the iPhone.

“One of the greatest gifts Steve gave to the world was Apple,” Cook said. “No company has ever inspired such creativity or set such high standards for itself. Our values originated from Steve and his spirit will forever be the foundation of Apple. We share the great privilege and responsibility of carrying his legacy into the future.”

Cook added: “I’m incredibly proud of the work we are doing, delivering products that our customers love and dreaming up new ones that will delight them down the road. It’s a wonderful tribute to Steve’s memory and everything he stood for.”

Jobs was just 21 when he founded Apple Computer in 1976 with his 26-year-old friend Steve Wozniak in his family garage.

From such humble beginnings the company grew into the world’s most valuable firm, with a market value of some $625 billion.

Jobs led the drive for Apple to produce the iPod, iPhone and iPad, and created iTunes, which became one of the world’s biggest e-commerce platforms and a leader vendor of music, apps and other content.

Under Jobs, Apple introduced its first computers and then the Macintosh, which became wildly popular in the 1980s. But he left Apple in 1985 after an internal power struggle and started NeXT Computer company, aimed at businesses.

He then co-founded Pixar animated studios in 1986 from a former computer graphics unit he bought from movie industry titan George Lucas. The studio produced acclaimed films like “Toy Story.”

Jobs reconciled with Apple in 1996 with the company buying NeXT for $429 million and Jobs ascending once again to the Apple throne.

Jobs revamped the Macintosh line, launching a “post-PC era” in which personal computers give way to smart mobile gadgets.