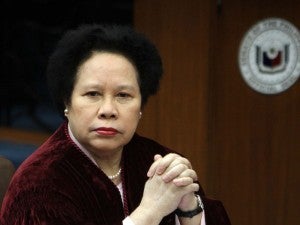 These are some of the punishable acts prescribed by the new law that makes Republic Act No. 10175 violative of the constitutional provision on free speech, said Santiago, a former trial court judge and magistrate-in-waiting to the International Court of Justice.

In addition, the law’s provisions are also “overbroad” and “vague,” which makes it unconstitutional, she said.

For these reasons, Santiago predicted the Supreme Court would strike down the cybercrime law as unconstitutional.

“Otherwise, it will be a black, black day for freedom of speech,” Santiago said in a speech on Saturday before business and economics students at Adamson University.

For example, the senator said, Section 5 cites aiding and abetting cybercrimes as one of the acts punishable under the new law. Ordinary Facebook and Twitter activities such as liking, sharing and retweeting could make one accountable under the law, she said.

“Simply repeating things, you made a comment, you liked, you shared, you’re already guilty, because you’re aiding and abetting. You can interpret it that way. That’s why I’m saying it is too vague,” Santiago told her audience.

Sen. Edgardo Angara, the sponsor and one of the authors of the bill in the Senate, has sought to dismiss such fears by saying that mere liking in Facebook doesn’t make one an author of material deemed libelous.

As to sharing, Angara said, conspiracy between the author and the one that shared should be established.

This is not something that’s easy to do, he said.

According to Santiago, the constitutional provision on free speech “sounds absolute” and thus, the cybercrime law begins with a “presumption of unconstitutionality.”

The burden of proof is on those that support the law to prove that it is constitutional, the senator said.

“[In] addition, the law is unconstitutional because it uses language that is overbroad and too vague,” she said.

She said the overbroad doctrine holds that if a law is broadly written, it deters free expression.

She expects the Supreme Court to strike down the new law “because of its chilling effect,” such that “you almost don’t want to use your computer for fear of becoming liable”.

According to Santiago, the vagueness doctrine refers to a law that provides a punishment without specifying what conduct is punishable. “[Therefore], the law is void because it violates due process,” she said.

Santiago said the overbroad and vague provisions of the Cybercrime Act are those on online libel, on aiding and abetting cybercrimes, on the adoption of the whole Revised Penal Code with punishments that are a degree higher, on making cybercrimes punishable also under the Penal Code, and on the authority of the Department of Justice to take down violative websites.

Preventing cybercrime is a necessity, however, the senator said.