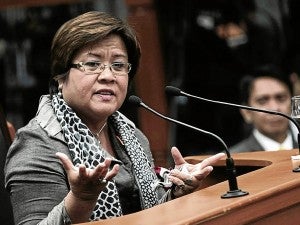 MANILA, Philippines—Justice Secretary Leila De Lima on Wednesday said the complaint filed by a 17-year-old girl who invoked the Cybercrime Prevention Act of 2012 after her alleged sex video has gone viral can still push through for violation of Republic Act 9995 or the Anti-Photo and Video Voyeurism Act.

The victim filed the case with the Department of Justice last October 3. It is the first complaint filed for violation of the controversial law.

De Lima said they have also referred the complaint to the National Bureau of Investigation (NBI) to determine other actions to take.

At the same time, De Lima said they will continue accepting complaints for violation of the Cybercrime Prevention Act even if there is a 120 day temporary restraining order issued by the Supreme Court against its implementation.

“But we will tell them please have patience because the Cybercrime law is not yet in effect but we will evaluate the complaint if there are other laws violated,” De Lima said.