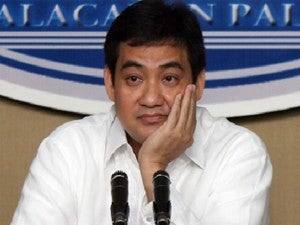 The 120-day temporary restraining order (TRO) by the Supreme Court against the Cybercrime Prevention Act was a “temporary setback,” Malacañang said Wednesday.

Presidential spokesperson Edwin Lacierda said the Executive Department was now “stymied” from implementing Republic Act No. 10175 against cybercrimes, at least until mid-January next year when the high court hears oral arguments on the case.

“It’s a temporary setback because amendments will be made to make sure that what made it controversial will be cured,” Lacierda said at a press briefing.

He said the government will use other already existing laws to address the different categories of crimes in the Internet.

“The E-Commerce law said hacking is a crime punishable under the E-Commerce Law. Some laws may be able to address those cybercrimes for now. As to what extent, we will leave it to the (Department of Justice),” he said.

But Lacierda dismissed suggestions that the government campaign against cybercrime was now back to zero.

The high court, in a unanimous resolution, directed respondents led by the President and key government officials to comment within 10 days on 15 petitions filed by Sen. Teofisto Guingona III, journalists’ groups, bloggers and netizens protesting the provisions in the new law punishing libel with a higher penalty.

Lacierda said the 120-day period was an opportunity for lawmakers to introduce amendments to the cybercrime law, which was greeted with protests and the hacking of government websites after it was signed on Sept. 12 and took effect on Oct. 3.

Critics of the Cybercrime Prevention Act on Wednesday said Congress should use the respite provided by the TRO to repeal its controversial provisions.

Party-list member Raymond Palatino (Kabataan) said he was troubled by senators’ statements that the amendatory bills would have to be put on hold while waiting for the Supreme Court to rule on the validity of the controversial provisions.

Senate President Juan Ponce Enrile earlier said that bills introducing amendments to the new law would have to wait until the high tribunal rules on its constitutionality.

“Why should we wait for the Supreme Court’s final decision before we act? Legislators committed a mistake in passing RA 10175, and the TRO issued by the Supreme Court is a cue for Congress to amend the law,” Palatino said.

He said the 120-day effectivity of the TRO against the law was enough time to process the amendatory bills in the House of Representatives and the Senate.

Palatino and party-list member Teodoro Casiño (Bayan Muna) have filed a bill to repeal several sections of the cybercrime law, including the provision that includes online libel as among the prohibited acts and which punishes it with a penalty one degree higher than that of the libel penalty under the Revised Penal Code.

Another provision they are contesting is the one that allows government agencies to disclose, preserve, search, seize and destroy computer data. They said the role of the courts in the granting of warrants relative to these acts was unclear.

They said they want to law to be brought back to its original intention to combat websites on child pornography, data and identity theft, and other internet scams.