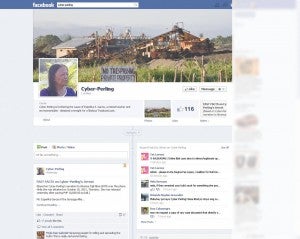 IN SUPPORT OF PERLING Netizens created this Facebook page to support Esperlita Garcia, who has been sued and arrested for libel for taking her opposition to mining to cyberspace. SCREENSHOT FROM FACEBOOK

BAYOMBONG, Nueva Vizcaya—Environmentalist Esperlita Garcia on Tuesday expressed alarm over what she described as possible attempts to intimidate her in her fight against mining and electronic libel.

Garcia, who has become the symbol of opposition to the cybercrime law, said she was told that two men and a woman knocked on her door  in Gonzaga Tuesday and asked for her. The three did not identify themselves.

“They left after they were told by my daughter that I was not in the house,” she told the Philippine Daily Inquirer by telephone.

“But things like these do not scare me. It is just my children and grandchildren I am concerned about,” she said.

Garcia was arrested and detained overnight on Thursday by agents of the National Bureau of Investigation on a warrant issued on Oct. 9 by Judge Conrado Tabaco of the Regional Trial Court in Aparri, Cagayan.

She is facing a libel case filed by Gonzaga Mayor Carlito Pentecostes Jr., who alleged her post on Facebook on May 1, 2011, was “malicious and defamatory.”

Garcia’s allies have set up “Cyber-Perling,” a Facebook page meant to create awareness and generate support for her cause. As of Tuesday afternoon, the page had registered about 7,000 hits and almost 600 “likes.”

Her case has become a rallying point for netizens and environmentalists who have opposed the libel provisions of Republic Act No. 10175, or the Cybercrime Prevention Act of 2012.

The Supreme Court has issued a 120-day temporary restraining order stopping the law’s implementation pending a decision on at least 15 petitions  to declare the law unconstitutional.

Garcia said she had been getting “overwhelming support” through messages from Facebook users on her “Cyber-Perling” page and her personal account, as well as through telephone calls.

But the 62-year-old grandmother, who leads the opposition to the magnetite mining operations by Chinese and Taiwanese firms in Gonzaga, has taken precautions on the advice of her family members and supporters, including Church leaders.

On Tuesday, she canceled a trip to Aparri, 250 kilometers from Gonzaga, to get the documents on her case.

“I am now against what looks like a conspiracy, with officials of agencies of government working to make sure that I get pinned down,” she said, citing how the Department of Justice (DOJ) found merit in the case and her subsequent arrest.

Asked for comment, Prosecutor Mila Acacio sent a text message suggesting that the Inquirer proceed to Aparri and check the court records.

Pentecostes laughed off insinuations that he wanted to get back at Garcia for her exposés on the black sand mining activities in Gonzaga and the controversy surrounding the libel case.

“This [issue] is just a simple case of libel that should not be sensationalized. I wish we could all go back to our normal lives and just let the wheels of justice take its course,” the mayor told the Inquirer.

He said the case had nothing to do with the cybercrime law and his complaint was based on the libel provision of the Revised Penal Code.

Pentecostes,  is running for reelection against Garcia, a former councilor, next year.

“If I am taking things personally against her, I would not have renewed the business permit for the lodge she owns, because of the pending case that I have filed against her,” he said.

The NBI director for Cagayan Valley, Hector Eduard Geologo, denied allegations that the agency conspired with Pentecostes and that he and another NBI agent manhandled Garcia during her arrest.

On Monday, presidential spokesperson Edwin Lacierda insisted that the libel charge against Garcia was prompted by an alleged violation of the Revised Penal Code, pointing out the P10,000 bail posted for her provisional release.

But yesterday, his deputy, Abigail Valte, said: “We’re also sort of wondering why the information in this particular case was filed … We are likewise in a quandary.”

Valte referred to an allegedly libelous statement posted on Facebook in 2009, which the DOJ investigated and dismissed. “There’s a little incongruence,” she said, referring to the DOJ resolutions on cases involving social networking sites in the past and the order for Garcia’s arrest.

Bayan Muna Rep. Teodoro Casino on Tuesday said Garcia’s case showed that even without the new law, “people can file libel cases based on Facebook posts or other electronic means.”

“This just goes to show that the cybercrime law is not only unnecessary but is very dangerous and an added threat to freedom of expression,” he said, noting that the new law increases the penalty for libel of up to 12 years imprisonment.

But an administration congressman disagreed. “I think the message is that we all have to be responsible in all our actuations in and out of the World Wide Web without discussing the merits of the Garcia case,” said Rep. Ben Evardone, head of the House committee on public information.

Sen. Edgardo Angara has filed a bill that would repeal higher penalties on libel in the cybercrime law.

The bill would also seek to require a court order when the government implements RA 10175’s provision on the shutting down websites.

“The procedural requirements introduced by this measure seek to strike a balance between the right of the owner and the need of law enforcement authorities for expediency and swift action,” said Angara, author of the measure in the Senate.

“The arrest of Garcia courtesy of the Gonzaga mayor will agitate the black sand mining syndicates and magnetite mining ganglands in the northern Luzon and Ilocos regions to do the same to other antimining groups and personalities,” Pamalakaya chair Fernando Hicap said in a statement. With reports from TJ Burgonio, Christian V. Esguerra, DJ Yap in Manila