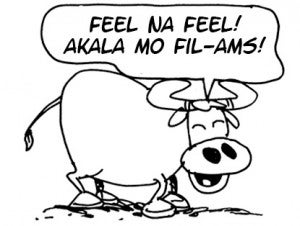 They couldn’t actually vote for either Barack Obama or Mitt Romney, but Filipino netizens sounded like Americans in Wednesday’s hotly contested presidential election in the United States.

Like the rest of America, Filipinos were caught up in the election fever as gleaned from comments, either for incumbent President Obama or his Republican challenger, made in social media platforms.

So active were Filipino netizens that one Eric Cham tweeted in jest, “Parang biglang dumami US citizens sa timeline ko ah.” Later he said, “I don’t think your tweets can guarantee you a US visa,” and told friends to “go back to work.”

“P-Noy (Aquino) is still our president. Don’t get carried away,” he joked in Filipino.

The comments apparently reflected the active involvement of Filipinos in a democratic exercise that was taking place far away from home. But thanks to Twitter, Facebook and the Internet, American elections didn’t seem too distant.

Filipinos flooded Twitter timelines with congratulatory messages soon after US media outlets began calling the election for Obama, who was gunning for a second four-year term.

Others compared the conduct of Philippine elections with that in the United States and were utterly disappointed. One Facebook user wished local polls could be like those in America, “Mabilis at walang dayaan (Fast and without cheating).”

Filipinos also liked the fact that losing American politicians were relatively quick in accepting defeat. Unlike here where one Filipino adage goes, “No politician loses; he’s only cheated.”

“To Pinoy politicians, learn from the Americans!” one Liza Seco wrote on her Facebook wall after Romney formally conceded defeat.

“I wish our country would have the political maturity America has when it comes to elections,” wrote another.

In a Quezon City mall, students who took part Wednesday in a mock US presidential election were as excited as their counterparts in cyberspace.

It took only two taps on an iPad screen for some 2,300 Filipinos nationwide to experience the American electoral system in the mock election.

For three students who came from Mindanao and were given the chance to take part in the exercise, which coincided with the US Election Watch at SM North Edsa, the two finger taps represented their first taste of politics.

Athina Adjawi, 14, of Zamboanga City, told the Philippine Daily Inquirer that she was glad to have been able to vote even as a teenager. “I was very excited,” she said, adding that the vote she cast for Obama was for his many achievements during his term.

For Yusrap Sahi, 15, of Basilan, the antipoverty and social welfare programs under the Obama administration were something that the American voters should really consider in casting their ballots.

Jianazen Hapas, 15, of Jolo province, agreed with her peers and said that during his first four-year term, Obama was able to deliver on his promises, particularly in alleviating the plight of poor Americans.

The three girls were part of a contingent of 42 high school students under the Kennedy-Lugar Youth Exchange and Study (YES) program.

The student exchange program gathers secondary school students from different parts of the world and enables them to attend high school in the United States for a year.

The program is funded by the US Department of State, providing scholarships for high school students aged 15 to 17 years old from countries with significant Muslim populations.

For her part, a 47-year-old mall patron, Sally Matillano, told the Inquirer that she was just curious about the activity and decided to participate by casting her electronic vote.

Matillano said that she was impressed by how quick and simple the process was. “Two clicks and you are done. I wish it was the same here,” Sally remarked.

She said that the same system should be adapted here so people required to go to the office on Election Day could still report for work.

“Here when you vote, you have to line up and the long lines take a lot of time. You sometimes have to spend hours at the polling precinct to vote,” she said.

Asked whom she voted for in the mock polls, Matillano declined to answer and said it was a secret.

The mock election, organized by the US Embassy and held simultaneously in 16 polling stations, including those set up in SM malls in Laoag, Cebu, Baguio, Dumaguete, Davao and Cagayan de Oro Cities, resulted in Obama garnering 76 percent of the votes over Romney, who got 24 percent.

In SM North Edsa, about 500 guests, including leaders of the Democrat and Republican overseas chapters in the Philippines, American students, and Filipino guests participated at the gathering, the main feature of which was monitoring election results from CNN via a giant television screen.

The crowd, apparently dominated by Obama supporters, erupted into cheers at 12:18 p.m. when CNN announced that, based on its projections, Obama won the tight race.

“The United States has always been, historically, an ally and supporter and with this new chapter in the nation’s history, we hope to be able to continue to work to strengthen our bonds of friendship and cooperation with them,” Rep. Juan Edgardo Angara said in a statement.

Albay Gov. Joey Salceda said Obama was “good for the country and good for the advancement of global resolution of climate change.”

At the Subic Bay Freeport, many American expatriates like California native Timothy Desmond were glued to the CNN coverage of the elections in the United States on Wednesday.

Desmond said he cast his vote for Obama, filing his ballot as an absentee voter. After Obama’s victory was announced, Desmond said: “I am happy with the outcome.”

In Angeles City, Richard Hodges, the second top official of the American Legion’s Chapter 123, said Obama had inherited many problems from his predecessor, including the effects of war in Afghanistan and the “residual war” in Iraq, and the bad social structure that affects the global economy.

“These things cannot be changed in just four years. Now … [Obama] has the chance to complete the job that he promised to the [American] people when he was first elected four years ago,” said Hodges, who voted as an absentee voter. With reports from Gil Cabacungan in Manila; and Robert Gonzaga and Jun Malig, Inquirer Central Luzon