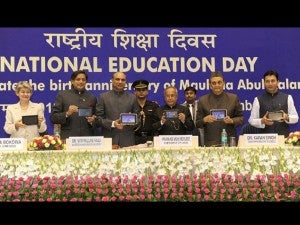 NEW DELHI—India has launched a new version of its ultra-low-cost tablet computer with a quicker processor and an improved battery, on sale to students at the subsidized price of $20.

The Aakash tablet, dubbed the world’s cheapest computer, has been developed as a public-private partnership aimed at making computing technology available to students in a country where Internet usage is only at around 10 percent.

Makers of the tablet, Britain-based Datawind, say the Aakash 2 is powered by a processor that runs three times faster than the original, has a bigger touchscreen and a battery with a life of three hours.

“This must be adapted to our specific needs and introduced expeditiously in all educational institutions across the country,” he added.

The first version of the Aakash was launched by the government in October last year but it was marred by problems including a short battery life, initial long waiting lists and difficulties with distribution.

“Unlike the previous version which was a non-starter, this time around there are some functions and features around the Android tablet which make it a decent computing device for that price,” stated pluggd.in, an Indian website that analyzes gadgets.

The first 100,000 devices will be sold to students at engineering colleges and universities at a subsidized price of 1,130 rupees (20 dollars) and subsequently Aakash 2 will be distributed to book stores in Indian universities.

Datawind says the commercial sale price without subsidies for Aakash 2 is 3,500 rupees (64 dollars).

Over 15,000 teachers at 250 colleges have been trained on the use of Aakash for education, according to India’s human resource development ministry.

The country has nearly 115 million Internet users, giving it the third-largest number in the world after China and the United States, but low penetration rates, data from the Internet and Mobile Association of India (IMAI) shows.