Netizens refuse to let Sotto off the hook 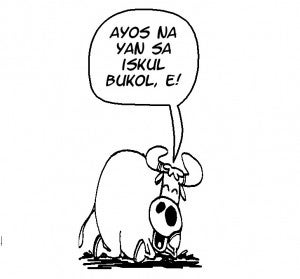 Sotto on Monday brushed off threats from the bloggers that they would file an ethics complaint against him.

“These were invented in the e-mail. I will be happy to reply or to react when I receive an official communication to that effect.  Other than that, maybe they just want me to be a talking head so they could have news. Excuse me,” Sotto said in an ambush interview.

Sotto has been accused of using parts of a blog entry written by US-based blogger Sarah Pope without attribution in his speech against the reproductive health (RH) bill.

Local bloggers supportive of the RH bill pointed out Sotto’s uncredited quote of the Pope blog, that ironically paraphrased an expert’s opinion on the subject and wasn’t even an original idea.

Days later, Sotto delivered another speech against the population control measure that included quotes from a speech made by the late US Sen. Robert Kennedy in 1966.

After bloggers again accused Sotto of plagiarism in the second incident, Sotto said he only included and translated into Filipino a quote he found relevant to the RH issue that was “texted” to him.

The senator joked he did not realize that Kennedy “spoke Tagalog.”

Earlier reports said a group of academics from the country’s premiere universities would lead the filing of the ethics case against Sotto.

They include Sylvia Estrada Claudio of the University of the Philippines Center for Women’s Studies; Lisandro Claudio of the Ateneo de Manila University Department of Political Science and former dean Antonio Contreras of the De La Salle University College of Liberal Arts. Red D. Tani, president of the Filipino Freethinkers Inc., is supporting the move.

Information reaching the Senate said the academicians would represent Pope.

There were also reports that Kennedy’s daughter Kerry Kennedy, a human rights activist, has demanded a public apology from Sotto for using her father’s speech without attribution.

Kerry Kennedy’s complaint, which is making the rounds on the Internet, noted that Sotto lifted portions from her father’s “Day of Affirmation” speech delivered in South Africa when it was still under apartheid rule.

“We cannot be questioned anywhere for what we say inside this chamber. Not because we are a special breed but because that is the immunity given by the sovereign people so that we can speak on any subject under the sun,” Enrile told reporters.

“You cannot be questioned by anybody outside this chamber.  How can you be questioned if you say anything here? That’s constitutional law. Not because of any arrogance of power [but] those people who do not understand it [are] ignorant of the very Constitution they are supposed to espouse,” he said.

“They can file a case … [but whether] they can get enough senators to vote in their favor, that’s the problem. As long as we have this system, it’s a question of numbers.”

Enrile  said a two-thirds vote is required before a senator facing an ethics complaint could be meted disciplinary action. Penalties range from admonition to expulsion from the chamber.

Minority Leader Alan Peter Cayetano, chairman of the Senate ethics committee, said he had received “less than 10” ethics complaints but declined to give details.