Hundreds queue up for Wii U debut in Japan 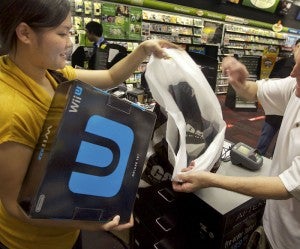 GameStop employee Lani Girran hands over a Wii U system to Kevin Owande, 51, of Renton, Wash., on a busy Black Friday at the GameStop Southcenter store in Seattle on Friday, Nov. 23, 2012. Owande was up early on Black Friday to purchase Wii U, one of the hottest products this holiday season. Photo by Stephen Brashear/Invision for Nintendo/AP Images

TOKYO — Hundreds of people queued up at electronics shops across Japan Saturday as Nintendo released its new Wii U game console, hoping to reposition itself in a gaming market invaded by online social games.

About 100 people were waiting outside Bic Camera’s flagship store in Tokyo’s Ikebukuro commercial district before it opened at 8 am, with the number quickly swelling to several hundred, an Agence France-Presse photographer said.

“I have already ordered one. But I lined up to catch this carnival atmosphere,” a 24-year-old graduate student, who waited overnight to become the first Wii U buyer at the Tokyo shop, told local media.

“I want to go home quickly to play the game.”

The Japanese electronics titan has already released the successor to its video game console Wii in the United States, Europe and Australia.

More than 425,000 new units were sold in the first week on the US market after its release there on November 18, according to Nintendo.

The original Wii device has sold more than 97 million units around the world since its launch in 2006.

The company plans to sell 5.5 million units of the new console and 24 million pieces of software by the end of March, hoping to turn around business after posting a net loss of 43.2 billion yen ($520 million) in the year to March 2012.

Wii U, equipped with a touch-screen controller called the Wii U GamePad, enables players to play games on a television display or on the GamePad screen.

Nintendo has vowed to start a trend in “asymmetrical play” that lets players using GamePad tablets have different in-game perspectives and roles than those using traditional wand controllers.

The new console is also portable — offering up a challenge to smartphone games — but still offers players the option to jump, shift and shout as they wriggle their bodies to move the action onscreen, like the original Wii.