Nintendo shoots for pole position with Wii U console 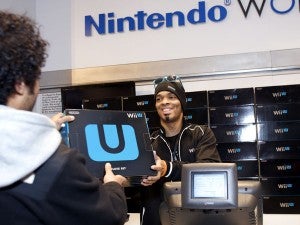 In this photo provided by Nintendo of America, a fan purchases one of the first Wii U systems in the world at the midnight launch event at Nintendo World in New York on Sunday Nov. 18, 2012. Wii U is set to change the way people interact with their games, their TVs and each other. (AP Photo/Nintendo, Anders Krusberg)

TOKYO – Nintendo is hoping its new Wii U console will catapult it back to pole position in the video game sector, but analysts are divided on whether the Japanese gaming titan can reboot its fading glory.

Last month, Nintendo released the long-awaited follow-up to its hugely successful Wii in the lucrative US market, selling an eye-popping 400,000 units in the first week alone as fans cleared store shelves.

At Amazon.com, Wii U consoles were being offered at opening prices hundreds of dollars above list prices of $300 for basic models and $350 for “deluxe sets”.

The firm is shooting for a similar reception in its fiercely competitive home market, where the Wii U was released Saturday. Nintendo and rivals Sony and Microsoft, makers of the PlayStation and Xbox, are battling for control of a sector worth about $44 billion annually, according to industry figures.

“If we had made more consoles, we could have sold more,” Nintendo president Satoru Iwata told Japan’s Nikkei business daily, referring to brisk US sales.

“It’s important for us to keep the sales boom through next year.”

But as the trio face tough economic conditions in their key US and European markets, they are also fending off a challenge from cheap – or sometimes free – downloadable games for smartphones and tablets.

Daiwa Securities analyst Satoshi Tanaka is not convinced the Wii U will cement Nintendo’s long-term momentum as millions turn to the likes of the wildly popular Angry Birds.

“Given the rapid progress in smartphones and gaming software for those kind of gadgets, the question remains: can Nintendo provide products tempting enough for people to pay for both hardware and software?” he said.

The original Wii consoles, launched in 2006, were a runaway success as they lured legions of “casual gamers” into the video game world with the introduction of motion-sensing controls.

Holiday sales this year will mark a key chapter in Kyoto-based Nintendo’s bid to climb back on top, with the gaming giant aiming to sell more than five million Wii U consoles by March.

It has sold nearly 100 million of the original Wii console since its release.

But a strong yen and disappointing sales of Nintendo’s 3DS game console weighed on results.
The firm in April reported an annual loss of 43.2 billion yen ($524 million), its first yearly shortfall since becoming a public company in the early sixties.

The company slashed the price of the 3DS, the world’s first video game console with a 3D screen that works without special glasses, following its lacklustre debut in a bid to boost Christmas sales.

Nintendo – which invented Donkey Kong and Super Mario, one of the best-selling video games of all time – has also scaled back its sales and net profit forecasts for the current fiscal year to March 2013.

But red-hot US demand for the Wii U suggests there are still plenty of casual gamers willing to fork out hundreds of dollars on a console, and more to buy games, said Etsuko Tamura, analyst at Mizuho Investors Securities.

“The customer base for mobile game software and that for stationary game consoles is different,” she said.

“Support for home video games from core game fans is still intact, and if Wii U consoles keep up strong sales through next year, it would help Nintendo’s profit recovery.”

Nintendo has vowed to start a trend in “asymmetrical play” that lets players using GamePad tablets have different in-game perspectives and roles than those using traditional wand controllers.

The new console is also portable – offering a challenge to smartphone games – but still offers players the option to jump, shift and shout as they wriggle their bodies to move the action
onscreen, like the original Wii.

“The Wii line is the only game console that a whole family can play together,” said Yusuke Tsunoda, analyst at Tokai Tokyo Research Center.

“That’s the strength of the product.”