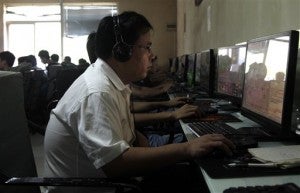 In this July 14, 2010 file photo, a Chinese man uses a computer at an Internet cafe in Beijing. China’s new communist leaders are increasing already tight controls on Internet use and electronic publishing following a spate of embarrassing online reports about official abuses. AP PHOTO/NG HAN GUAN

The measures suggest China’s new leader, Xi Jinping, and others who took power in November share their predecessors’ anxiety about the Internet’s potential to spread opposition to one-party rule and their insistence on controlling information despite promises of more economic reforms.

“They are still very paranoid about the potentially destabilizing effect of the Internet,” said Willy Lam, a politics specialist at the Chinese University of Hong Kong. “They are on the point of losing a monopoly on information, but they still are very eager to control the dissemination of views.”

This week, China’s legislature took up a measure to require Internet users to register their real names, a move that would curtail the Web’s status as a freewheeling forum to complain, often anonymously, about corruption and official abuses. The legislature scheduled a news conference Friday to discuss the measure, suggesting it was expected to be approved.

Disrupting use of software

That comes amid reports Beijing might be disrupting use of software that allows Web surfers to see sites abroad that are blocked by its extensive Internet filters. At the same time, regulators have proposed rules that would bar foreign companies from distributing books, news, music and other material online in China.

Beijing promotes Internet use for business and education but bans material deemed subversive or obscene and blocks access to foreign websites run by human rights and Tibet activists and some news outlets. Controls were tightened after social media played a role in protests that brought down governments in Egypt and Tunisia.

In a reminder of the Web’s role as a political forum, a group of 70 prominent Chinese scholars and lawyers circulated an online petition this week appealing for free speech, independent courts and for the ruling party to encourage private enterprise.

Xi and others on the party’s ruling seven-member Standing Committee have tried to promote an image of themselves as men of the people who care about China’s poor majority. They have promised to press ahead with market-oriented reforms and to support entrepreneurs but have given no sign of support for political reform.

Communist leaders who see the Internet as a source of economic growth and better-paid jobs were slow to enforce the same level of control they impose on movies, books and other media, apparently for fear of hurting fledgling entertainment, shopping and other online businesses.

Until recently, Web surfers could post comments online or on microblog services without leaving their names.

That gave ordinary Chinese a unique opportunity to express themselves to a public audience in a society where newspapers, television and other media are state-controlled. The most popular microblog services say they have more than 300 million users and some users have millions of followers reading their comments.

The Internet also has given the public an unusual opportunity to publicize accusations of official misconduct.

A local party official in China’s southwest was fired in November after scenes from a videotape of him having sex with a young woman spread quickly on the Internet. Screenshots were uploaded by a former journalist in Beijing, Zhu Ruifeng, to his Hong Kong website, an online clearing house for corruption allegations.

The government says the latest Internet regulation before the National People’s Congress is aimed at protecting Web surfers’ personal information and cracking down on abuses such as junk e-mail. It would require users to report their real names to Internet service and telecom providers.

The main ruling party newspaper, People’s Daily, has called in recent weeks for tighter Internet controls, saying rumors spread online have harmed the public. In one case, it said stories about a chemical plant explosion resulted in the deaths of four people in a car accident as they fled the area.

Proposed rules released this month by the General Administration of Press and Publications would bar Chinese-foreign joint ventures from publishing books, music, movies and other material online in China. Publishers would be required to locate their servers in China and have a Chinese citizen as their local legal representative.

That is in line with rules that already bar most foreign access to China’s media market, but the decision to group the restrictions together and publicize them might indicate official attitudes are hardening.

That comes after the party was rattled by foreign news reports about official wealth and misconduct.

In June, Bloomberg News reported that Xi’s extended family has amassed assets totaling $376 million, though it said none was traced to Xi. The government has blocked access to Bloomberg’s website since then.

In October, The New York Times reported that Premier Wen Jiabao’s relatives had amassed $2.7 billion since he rose to national office in 2002. Access to the Times’ Chinese-language site has been blocked since then.

Previous efforts to tighten controls have struggled with technical challenges in a country with more than 500 million Internet users.

Microblog operators such as Sina Corp. and Tencent Ltd. were ordered in late 2011 to confirm users’ names but have yet to finish the daunting task.

Web surfers can circumvent government filters by using virtual private networks—software that encrypts Web traffic and is used by companies to transfer financial data and other sensitive information. But VPN users say disruptions that began in 2011 are increasing, suggesting Chinese regulators are trying to block encrypted traffic.

Curbs on access to foreign sites have prompted complaints by companies and Chinese scientists and other researchers.

In July, the American Chamber of Commerce in China said 74 percent of companies that responded to a survey said unstable Internet access “impedes their ability to do business.”

Chinese leaders “realize there are detrimental impacts on business, especially foreign business, but they have counted the cost and think it is still worthwhile,” said Lam. “There is no compromise about the political imperative of controlling the Internet.”