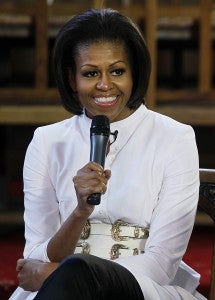 WASHINGTON—Michelle Obama’s office said Thursday it had opened a Twitter account, as the US first lady turned 49.

The account is @FLOTUS, the acronym for First Lady of the United States, and it will be administered by the first lady’s staff.

Tweets penned by the first lady herself will bear her initials — mo.

As of midday Thursday, the account had just over 16,000 followers. That compares to 2.64 million for @MichelleObama, which opened in January 2012 and was run by President Barack Obama’s re-election campaign team.

Tweets from the @MichelleObama account have been infrequent since her husband won the election on November 6.