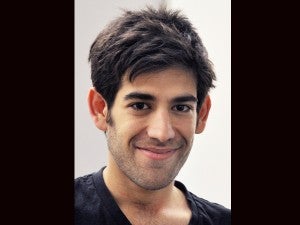 This Dec. 8, 2012 photo provided by ThoughtWorks shows Aaron Swartz, in New York. Swartz, a co-founder of Reddit, hanged himself Friday, Jan. 11, 2013, in New York City. Since his suicide, friends and admirers have eulogized the 26-year-old free-information activist as a martyred hero, hounded to his death by the government he antagonized. AP/ThoughtWorks, Pernille Ironside

NEW YORK— Hundreds of friends and supporters of Aaron Swartz are gathered in New York City to pay tribute to the free-information activist and online prodigy who killed himself last week.

The 26-year-old Swartz hanged himself in his apartment in Brooklyn the month before he was to go on trial in Boston.

Federal prosecutors accused him of breaking into a computer wiring closet at the Massachusetts Institute of Technology in 2010 and tapping into the university’s computer network to get millions of paid-access scholarly articles.

Swartz’s family has blasted prosecutors’ handling of his case, saying overreaching led to his death.

The statement said it was “a tragedy for this brilliant young man to be so threatened that he hanged himself.”